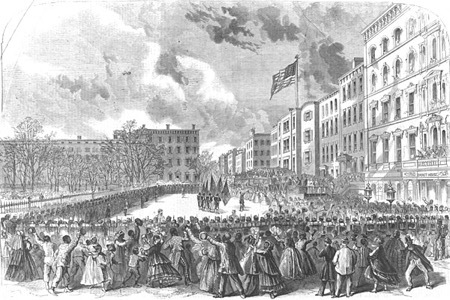 The 20th Colored Infantry consisted of men of color from New York State. Three Infantry Units of consisting of black volunteers were formed at Rikers and Harts Islands. The company marched into Union Square for a ceremony where thousands watched as they marched down Fifth Avenue. An Article from Harpers Ferry quoted the commanding Colonel stating “It has been the habit of those among us,” said Colonel Bartram “who sympathize with the traitors now in arms against us, to sneer at what they are pleased to term the cowardice of the negro. I hope that Port Hudson, Fort Wagner and Olustee have forever settled this question.” The 20th was mustered in after a month of training at Rikers Island to the Gulf war zone. Under the command of Colonel Nelson B. Bertram the unit showed its bravery at the Battle of Port Hudson. These men were also sent to Texas, Florida and Tennessee. Of the unit's soldiers, over 285 died during the war. Only one individual died of wounds he had received in action. One officer and 263 men died of disease, one man drowned and one officer and three soldiers committed suicide. There were 14 deaths that were unexplained and one man dying of heatstroke. The unit was honorably discharged October 7th, 1865.