The following people were exempt from military duty due to this law:

Any person enrolled and drafted could present a suitable substitute to go in his place. If someone could not find another person to go in for him, he could pay $300 to the Secretary of War in order for a substitute to be found and paid.

Someone was labeled a deserter if they were drafted and did not report to the army, come up with a substitute, or pay the $300. If caught, the law stated that they would be arrested by the provost-marshal and be, “sent to the nearest military post for trial by court martial.” There were also many cases of substitutes that deserted right after they got paid. One of the major flaws of the law was that substitutes got paid $300 right after they signed up. Many people deserted just after they got paid and signed up to be a substitute in another town.  Men were able to make a living off doing this and became known as “bounty jumpers”.

Public Reaction to the Enrollment Act:

The Enrollment Act was not well received in New York. Many were angered that wealthy men could pay their way out of service. This lead to the belief that it was a “rich man's war and a poor man's fight”. White men and immigrant workers also were angry that African American’s were exempted from the draft. They feared that African Americans were gaining more power and would take their jobs from them. The outrage over the conscription act boiled over in New York City in July of 1863. Two days after the first draft drawing, a mob of thousands of men rioted in the streets from July 13th to the 16th. The mob burned down government buildings and targeted black men. 4,000 soldiers from Gettysburg had to be sent to the city to put the riot down. After four days of devastation, at least 120 men had been killed including eleven black men who were lynched. This event caused many African Americans to move out of the city.

There were rumors throughout Ulster County that there would be a riot, but there was never any major act of resistance. Kingston’s Sheriff's Office released this letter in local newspapers to try to convince people to not violently resist the draft:

We copy the following from the Argus of last week:

To my Fellow Citizens of the County of Ulster, and all whom it may concern:

With profound regret I have been notified that a conspiracy has been concocted, having for its object the destruction of public and private property in our county, should our Government persist in enforcing the draft. I do hope the report has been exaggerated. I cannot seriously entertain the thought, after due consideration, that Old Ulster, time-honored for its law-abiding proclivities, would now forget her dignity, her history and her obligations, by getting in a false position.

What a lamentable spectacle we should present to the world, if mob law and anarchy should reign triumphant through the land! Then, indeed, we might say we had no country; for what is a country without wholesome and beneficent laws? Our Constitutional privilege is, if a law is found oppressive, we can repeal it; but as long as it continues a law of the land it is our duty as good and loyal citizens, to bow to its authority. By that course (as experience has taught us) our safety, happiness and National respect is promoted.

Now allow me to say, that as yet, there has been no official notification received on the subject of the draft. When there is, due notice will be given; and then should the necessity arise for the employment of force to sustain the laws and save our country from disgrace,

I, as Sheriff of the County of Ulster, relying on the support and willing co-operation of all good citizens, hereby declare, in accordance with the power in me vested. that I shall use all the necessary means at my disposal for the suppression of riot and outrage; and should force have to be met by force, let the law abiding and well disposed citizens stand by the constituted authorities, and our laws will be sustained.

But I sincerely hope that reason and the good sense of the people of this country will prevent such a lamentable and wicked exhibition as that of American citizens, particularly citizens of Old Ulster, rising in organized defiance against their government and laws. 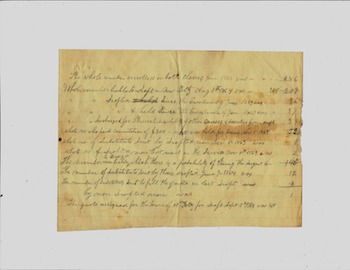 Results of the Draft:

The 1863 draft was not successful in conscripting men into the military since many men either payed the $300 commutation fee, provided a substitute, or were exempted. An insert in the 1863 New Paltz Enrollment Book reports that the whole number of men drafted in New Paltz since the Enrollment in June 1863 was 76. The whole number of drafted men that went in the service on November 5th, 1863 was only 2. This very small percentage of men actually drafted into military service was consistent throughout New York as well as the rest of the country. A total of 292,441 men were drafted in the first draft in the summer of 1863. After subtracting men who failed to report, the total was down to 252,564. Only 9,880 out of 252,564 were not able to personally avoid military service through an exemption, payment of $300, or furnishing of a substitute. Twenty-six thousand and two men provided substitutes, so the actual number of men that this draft brought into military service was 35,882 out of the original 292,441 drafted.

The draft did work to an extent in that the fear of it influenced many to people to enlist. Johannes Lefevre wrote to his brother Peter in a letter dated August 17th, 1862, “...many who had no notion of volunteering before now have prefered to volunteer & go in a Reg. of their own choosing and receive the bounty and extra pay to running the risk of being drafted & put amongst strangers.” Men wanted to enlist because they could choose to be in a regiment with friends and neighbors. They were concerned that if they were drafted, they might end up in a regiment with unfamiliar people.