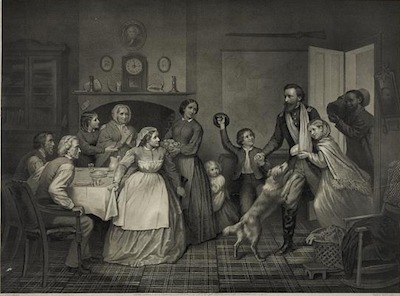 When the Civil War ended, and soldiers were finally able to make the often long and difficult journey back home, they found that over the years their homes had changed dramatically. Friends and family they had left at the start of the war may have died or moved during the four years of feuding. Many families were split apart during the war years due to financial hardships. When the men’s soldier salaries were sparse or nonexistent as they were for much of the war, wives back home were forced into poverty and children were taken to different homes for care or the family could be found in the local poorhouse.

After four years of being gone, men returning from war found their hometowns and loved ones changed, and they were changed as well. The horrors of war drove men insane, and some found their way into asylums in the years after the conflict ended. Others, if they were unable to reconnect with or find their families, took to wandering, becoming vagabonds and traveling wherever fortune carried them. Many, in the hopes of putting the past behind them, looked to the west for salvation. They moved west in the hopes of obtaining their own land for a fresh, clean start, following the railroad for work and a means of traveling the distance. Still others became “carpetbaggers” and looked for economic gains in the crumpled infrastructure of the south. Peter LeFever, a local New Paltz man who served in the 156th regiment, was one such carpetbagger who moved his family south after the war in search of a fresh start. For some New Paltz men returning from the war, they turned to their local town politics as a way to champion rights, and put their leadership qualities to work. Charles Ackert, of the New Paltz Times, was elected Town Clerk numerous times following his service.

The years following the end of the war were a period of transition for the entire country, and the personal struggles of returning soldiers and their families defined the nation. Economically, the country was in shambles, with the southern economy destroyed and in the process of Reconstruction. The northern economy was not in much better shape, and men returning had hard work cut out for them in rebuilding the farms and businesses they left behind. The nation as a whole was struggling for economic stability and the federal government had no funds, not even to pay soldiers and widows their pensions. Many soldiers had to campaign for their pensions, the pensions of widows, and the pensions of black soldiers who fought on behalf of the Union army.

The Civil war changed a great deal for the nation, and when soldiers returned to their homes they found that nothing was exactly like they had left it. For some, the transition back into civilian life took its toll, and they were unable to live the lives they once had, but others found comfort in returning to the places they grew up.