The Metropolitan Fair was the largest fundraising effort of the war. Held on March 28, 1864, it was a much larger event than a simple fair.

“It is designed to be something much larger than a "fair" in the modern acceptation of that term. Every branch of agriculture, trade, industry and art, will be invited to contribute its choicest and costliest products for exhibition and sale. Musical and dramatic artists will be invited to aid the common cause with their talent and genius. All the material resources of the great City of New-York and of the region directly tributary to it, are to be invoked. The farmers of New-York, Pennsylvania, Connecticut, New-Jersey, and the adjacent States, will send in specimens of their finest stock; our factories will contribute locomotives, grand pianos, sewing machines, steam plows and all the mechanical products of Northern intelligence and industry, in aid of the great cause of National Unity.” 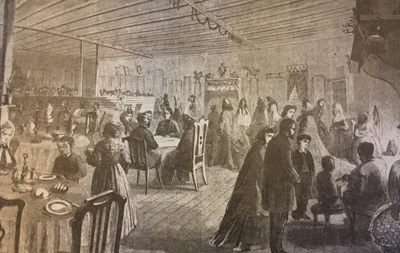 The Fair featured booths from each county of the participating states. Ulster County’s booth itself raised over $2,000 alone from sale of its own goods. Nearly all items were sold and the money all went to the relief aid of the sick and wounded in the National Army. The Fair as a whole raised more than $1,000,000. This greater area fair reflected the sentiment of the time and the desire of so many to support the men fighting. It was a greater effort of women to do as much as they could, exercising their abilities to support their family members. The Metropolitan Fair featured primarily things handmade by the ladies, knitting and food stuffs, as well as baskets carved by Jacob Wynkoop, a black soldier. The fair also sold candles, cement, rabbits, corn, potatoes, and wintergreen, as well as art and mechanical products.

Image credit of Fair: Banners and Bugles by William Plank