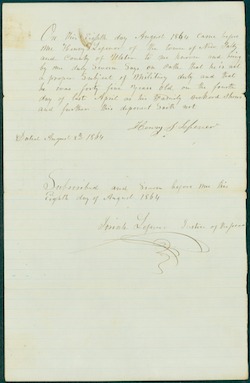 Henry S. Lefever of New Paltz was granted an exemption for serving in the military during the Civil War due to his age. Henry declared he was over 45 years of age. According to the 1865 New York State Census, Henry was listed as being 46 years of age and living with his wife Rachel and their three daughters.

After someone was notified that they had been enrolled as eligible for military service, they had until the 15th of August to “file a written statement of such exemption, verified by affidavit, in the office of the town or city clerk.” Anyone claiming exemption had to swear on oath to an official like the Justice of the Peace that they were exempt. Below, are selected exemption statements of men who lived in New Paltz.

Along with the exemptions stated in the Enrollment Act of 1863 and the New York State Militia Law, many men were exempted from the draft due to medical issues. On the 9th of November, 1863, the Provost Marshall’s Office released a list of 41 physical and mental infirmities that would result in exemption from military service. The extensive list includes diseases, physical deformities, loss of limb, and mental illnesses:

2. Insanity. This includes well-established recent insanity, with liability to a recurrence.

3. Epilepsy. For this disability the statement of the drafted man is insufficient, and the fact must be established by the duly attested affidavit of a physician in good standing who has attended him in the disease within the six months immediately preceding his examination by the Board.

4. Paralysis, general or of one limb, or chorea; their existence to be adequately determined. Decided atrophy of a limb.

5. Acute or organic diseases of the brain or spinal cord; of the heart or lungs; of the liver or spleen; of the kidneys or bladder, which have so seriously impaired his general health as to leave no doubt of the man's incapacity for military service.

7. Cancer; aneurism of the large arteries.

8. Inveterate and extensive disease of the skin, such as will necessarily impair his efficiency as a soldier.

9. Decided feebleness of constitution, or deficient size of chest, sufficient in degree to leave no doubt of the man's unfitness for military service.

10. Scrofula, or constitutional syphilis, which has so seriously impaired his general health as to leave no doubt of the man's incapacity for military service.

II. Habitual and confirmed intemperance, or solitary vice, which has so materially enfeebled the constitution as to leave no doubt of the man's incapacity for military service.

12. Chronic rheumatism, unless manifested by positive change of structure, wasting of the affected limb, or puffiness or distortion of the joints, does not exempt. Impaired motion of joints and contraction of the limbs, alleged to arise from rheumatism, and in which the nutrition of the limb is not manifestly impaired, are to be proved by examination while in a state of anaethesia induced by ether only.

13. Pain, whether simulating headache, neuralgia in any of its forms, rheumatism, lumbago, or affections of the muscles, bones or joints, is a symptom of disease so easily pretended that it is not to be admitted as a cause for exemption, unless accompanied with manifest derangement of the general health, wasting of a limb, or other positive sign of disqualifying local disease.

14. Great injuries or diseases of the skull, occasioning impairment of the intellectual faculties, epilepsy, or other manifest nervous or spasmodic symptoms.

17. Total loss of nose; deformity of nose so great as seriously to obstruct respiration; ozaena, dependent on caries in progress.

18. Decided deafness. This disability must not be admitted on the mere statement of the drafted man, but must be proved by the existence of positive disease, or by other satisfactory evidence; and it must be so decided as to leave no doubt of the man's unfitness for military service. Chronic purulent otorrhoea.

19. Incurable diseases or deformities of either jaw, such as will necessarily greatly impede mastication or speech. Anchylosis of the lower jaw; caries of the bone of the face, if in progress; cleft palate, (bony;) extensive loss of substance of the cheeks, or salivary fistula.

20. Dumbness; permanent loss of voice; not to be admitted without clear and satisfactory proof.

21. Total loss of tongue; hypertrophy, atrophy, mutilation, or obstinate chronic ulceration of the tongue, if sufficient in degree to interfere seriously with the use of the organ.

22. Stammering, if excessive and confirmed; to be established by satisfactory evidence under oath.

23. Loss of a sufficient number of teeth to prevent mastication of food. This applies to those cases only where the loss of teeth is so great that, if the man were restricted to solid food, he would soon become incapacitated for military service.

24. Tumors or wounds of the neck, impeding respiration or deglutition; fistula of larynx or trachea; torticollis, if of long standing and well marked.

25. Deformity of the chest, or excessive curvature of the spine, sufficient to prevent the carrying of arms and military equipments; caries of the spine, ribs or sternum.

28. Artificial anus; stricture of the rectum; prolapsus ani. Fistula in ano is not a positive disqualification, but may be so, if extensive or complicated with visceral disease.

30. Total loss or nearly total loss of penis, epispadia or hypospadia at the middle or near the root of the penis.

32. Incontinence of urine, being a disease frequently feigned, and of rare occurrence, is not of itself a cause of exemption. Stone in the bladder, ascertained by the introduction of the metallic catheter, is a positive disqualification.

33. Loss or complete atrophy of both testicles from any cause; permanent retention of one or both testicles within the inguinal canal; but voluntary retraction does not exempt.

34. Confirmed or malignant sarcocele; hydrocele, if complicated with organic disease of the testicle. Varicocele is not, in itself, disqualifying.

36. Wounds, muscular or cutaneous contractions from wounds or burns or tumors, which would prevent marching, or otherwise manifest incapacitate the man for military service.

37. Fractures, irreducible dislocations or anchylosis of the large joints; or chronic diseases of the joints or bones, that would prevent marching, or otherwise unfit the man for military service.

38. Total loss of a thumb; total loss of the index finger of the right hand. Other permanent defects or deformities of the hands so decided as to leave no doubt of the man's incapacity for military service.

39. Club feet; total loss of a great toe. Other permanent defects or deformities of the feet, such as will necessarily prevent marching.

40. Varicose veins of inferior extremities, if large and numerous, and accompanied with chronic swellings or ulcerations.