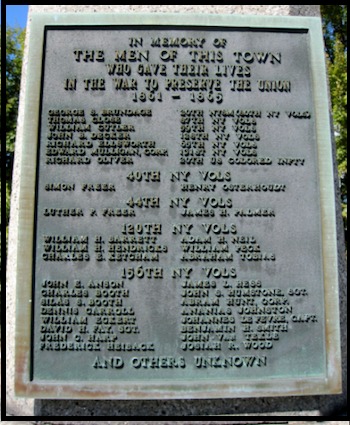 The New Paltz Rural Monument was dedicated in 1870 to the Civil War Veterans of New Paltz. New Paltz and the surrounding towns had many men drafted who served their country honorably. The monument was erected to serve as a reminder of the many that served, putting their lives at risk to protect their country, while also honoring the ones that made the ultimate sacrifice. Inscribed on the monument are the names of the men that served, primarily the 156th, New Paltz's own regiment. The monument however was not a fan of everyone in the town. 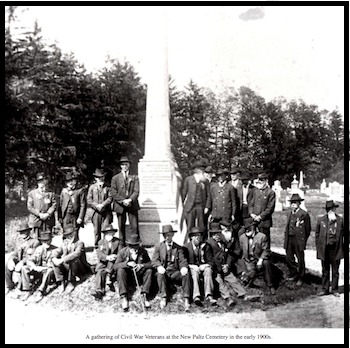 In a letter from Peter Lefevre to his mother, Elizabeth, Peter wrote about his mother's negative attitude about erecting a monument. Elizabeth thought there was no need for a monument since so many men escaped or paid for a substitute to avoid the draft. However, Peter argued that many men fought honorably from New Paltz and that the quota was met without a draft. Peter felt the monument was the right way to respect the men that had served in the town and that they would be remembered. Their sacrifice would never be forgotten and their memory never forgotten. Often when the cemetery and the local G.A.R. unit celebrated Memorial Day, the monument was a key part in remembering the sacrifices of the Civil War. Even today, well over one hundred years later, this monument does serve as a reminder of the men who served during the Civil War.