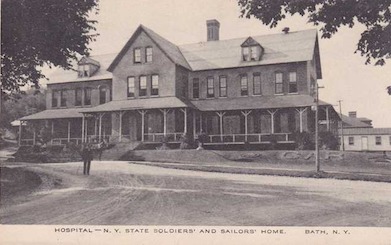 At the end of the Civil War, 1.9 million soldiers returned home battered and bruised. Many faced economic hardships before leaving for duty, and now coming back injured federal aid was a necessary installment to begin a return to normalcy. In altercations before the Civil War, Soldiers and Sailors Homes were established to house veterans and provide them with long-term treatment nationwide. After the Civil War ended, the need for more care became dire and so Lincoln established the National Asylum for Disabled Volunteer Soldiers (NHDVS), establishing branches located in New York, Maine, Ohio, Virginia, California, Indiana, Illinois, South Dakota and Tennessee. Veterans were able to receive long-term medical care in their own living space. These facilities eventually developed recreational activities, libraries, and church services.

Within New York, veteran care was not established immediately. The first attempt failed to become law because of the uncertainty that the state needed such a facility. The belief was that families were able to take care of their own. In 1872, a State Home was established, and the $100,000 needed for construction was raised by The Grand Army of the Republic (GAR). Three buildings were constructed on a 241-acre farm in Bath, New York, including a Human Resources office, Domiciliary, and Voluntary/Canteen.

Pensions were first established in 1862 through the General Law pension system, which provided monthly payments to widows, children under 16 years of age, and dependent relatives of soldiers who died in military service. In 1872, lump sums were able to be collected by veterans or their dependents based on date of discharge or death along with the monthly pension they received. Women who served as nurses during the Civil War were recognized in 1892 by also becoming eligible for pensions. These laws only applied to the Union Army when the war ended.