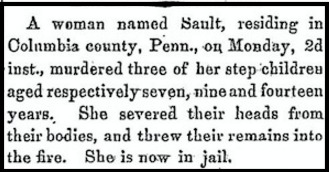 Despite the war raging across the nation, life went on as close to normal as it possibly could. With the New Paltz Times under the supervision of Eliza Ackert, the newspaper continued to run throughout the war, with Charles sending in his reports from active service, and Eliza taking over the printing and distribution. Along with Charles’ personal editorials, the newspaper also continued to print news and advertisements that were pertinent to the local happenings of the town and surrounding area. Gossip still flourished and people still squabbled. Daily life continued as close to normal as possible for the residents of New Paltz, who still had to keep their lives going even when family members were away fighting. The local New Paltz newspaper was the best way for residents to learn of events both local and national.

Much of the news, national in nature, affected the local New Paltz residents on a personal level. The news ranged from Charles Ackert’s reports of soldiers' health, obituaries of local men as casualties of war, such as Charles E. Ketcham of Gardiner, the opening dates of the schools, and changes in business to criminal accounts and riddles.

The local news was categorized in its own column, titled “Home and County Items” which functioned as local news and gossip. The newspaper was moderately evenly split between war and national news, and more locally concentrated issues and notices.

The February 20, 1863 issue of the New Paltz Times, in the midst of the Civil War, was still concerned with local personal issues, and made sure to cater to the local needs of the readership on a variety of topics. Besides the sorrowful passing of the Union soldier, the paper also has a small insert concerning a woman murdering her children.

A woman named Sault, residing in Columbia county, Penn., on Monday, 2d inst., murdered three of her stepchildren aged respectively seven, nine and fourteen years. She severed their heads from their bodies, and threw their remains into the fire. She is now in jail. 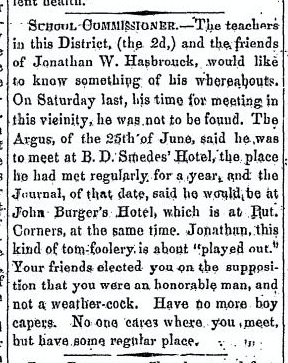 Events like this would have caught the interest of the town, as it was a morbid distraction from their fears for family fighting in the war.

Local gossip during this issue of the paper focused on Jonathan W. Hasbrouck, the school commissioner who was failing to show up for meetings and perform his duties. The newspaper printed a call for Hasbrouck to take care of his responsibilities.

SCHOOL COMMISSIONER. - The teachers in this District, (the 2d,) and the friends of Jonathan W. Hasbrouck, would like to know something of his whereabouts. On Saturday last, his time for meeting in this vieinity [sic], he was not to be found. The Argus, of the 25th of June, said he was to meet at B.D. Smedes’ Hotel, the place he had met regularly for a year, and the Journal, of that date, said he would be at John Burger’s Hotel, which is at Put. Corners, at this time. Jonathan, this kind of tom-foolery is about “played out.” Your friends elected you on the supposition that you were an honorable man, and not a weather-cock. Have no more boy hood capers. No one cares where you meet, but have some regular place. 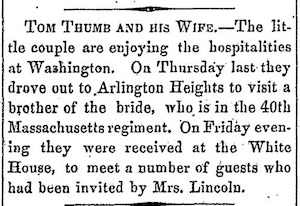 Despite the war, daily life, and the running of the town and town functions, still needed to run smoothly. There was still some humor left in the residents of the town as well, searching for their school commissioner.

National gossip news that would interest the readership of the New Paltz Times also found its ways into print, such as the travels of celebrity couple Tom Thumb and wife Lavinia.

TOM THUMB AND HIS WIFE.- The little couple are enjoying the hospitalities at Washington. On Thursday last they drove out to Arlington Heights to visit a brother of the bride, who is in the 40th Massachusetts regiment. On Friday evening they were received at the White House, to meet a number of guests who had been invited by Mrs. Lincoln.

The variety of celebrity news, local gossip and more serious descriptions of the ongoing war found their way into the pages of the New Paltz Times week after week. A selection of the “Town and County Items” for the February 20, 1863 issue included a long list of short, helpful and informative fragments.

-Senator Freer, a medical man, by they way, is giving his attention to a bill to furnish tourniquets to all soldiers of this state, that they may be enabled to stop hemorrhage in case of receiving wounds.

-Friends of deceased soldiers should be on their guard against giving authority to strangers to obtain arrears of pay and bounty. Imposters are operating in this business, and none nut responsible persons should be employed.

-Major Shaffer, of the 156th regiment, has been honorably discharged, on account of ill-health

-Hon. Jacob LeFever will please accept our thanks for favors. 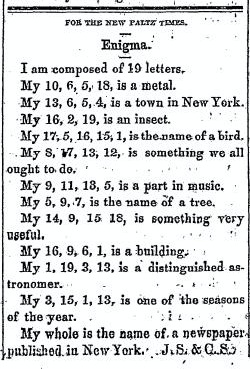 The newspaper was also a place to find games, brain teasers, and riddles. The February 20, 1863 issue featured this riddle.

I am composed of 19 letters.

My whole is the name of a newspaper published in New York.

Without modern technology as we know it, the newspaper was the only way by which people could receive national news, stay current with local events, and even find entertainment and diversion from the worries of loved ones in service.