African Americans on the Mary Powell

Although it is not clear whether or not Black or African American passengers were allowed to travel aboard the Mary Powell, many of them did work aboard the boat, mostly restricted to lower-paying jobs such as deckhands, waiters, and boilermen. Some steamboats did have Black stewards, and the Mary Powell had Fannie M. Anthony — the Black stewardess who managed the ladies’ cabin for decades, but it is unclear if any of the stewards listed in the Mary Powell crew records were African American or not.

Unfortunately, aside from Fannie M. Anthony, who was so famous she was featured in local newspapers a number of times during her tenure as stewardess, none of the Black crew members pictured in the museum's collections have yet been identified. 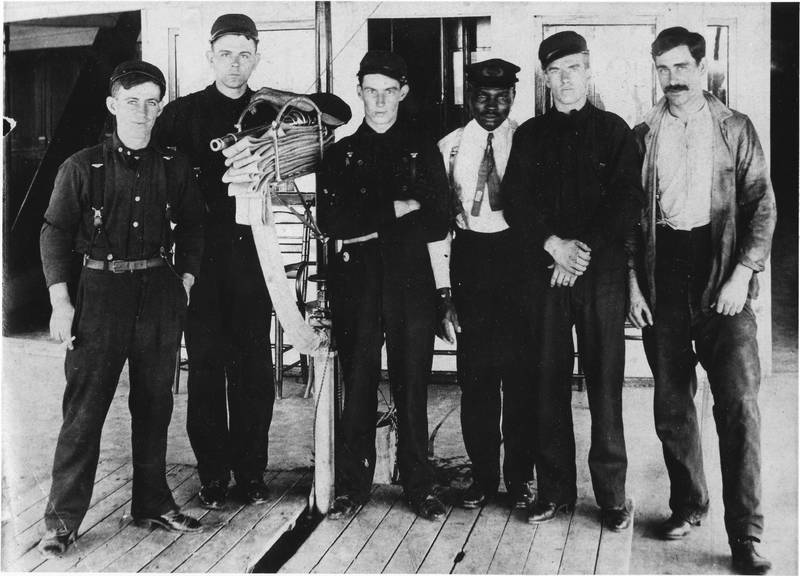 In this image, an unidentified Black man wearing what appears to be an officers hat is pictured with white crew members, including a young Arthur Warrington, who would go on to captain the Mary Powell toward the end of her career. Sadly, the picture is too fuzzy to make out the title on the hat, but it may be either “Engineer” or “Tender,” which was shorthand for “water tender,” or the crewman in charge of maintaining water supply to the boilers and elsewhere throughout the ship. Because these men are pictured next to a fire hose, it seems likely that they were the crew charged with fire suppression duties, and may have worked in engineering.