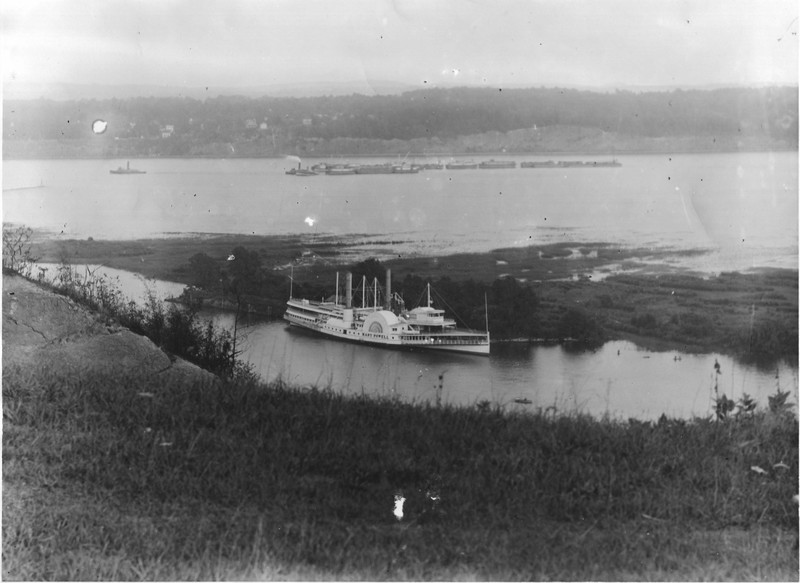 Mary Powell at Sunflower Dock along south shore of Rondout Creek, as seen from above. In the background, a tugboat tows a long string of barges on the Hudson River. Donald C. Ringwald Collection, Hudson River Maritime Museum.

Sitting idle at the Sunflower Dock near the mouth of Rondout Creek for the 1919 season, by the fall of 1919 rumors were swirling that the Mary Powell was going to be scrapped. Later accounts indicate the Hudson River Day Line thought there was too much “bad timber” in her for her to make Hudson River trips safely, and she was likely too old and too expensive to overhaul.

In November, the Mary Powell was sold at auction, and was jointly purchased for $40,000 by Ruben Cohen of the Hudson Valley Waste and Metal Company, based in Poughkeepsie, and Israel Levinson of the Newburgh Iron and Metal Company. The sale contract had two stipulations: that the Mary Powell not be used for passenger or freight service on the Hudson River, and that she not be sold to a motion picture company nor “burned in the making of a cinema spectacle.” E. E. Olcott, President of the Hudson River Day Line, reportedly turned down an offer of $100,000 to use the Mary Powell in a motion picture. When asked, Cohen and Levinson said they would attempt to sell the Mary Powell intact to a steamboat company on another river, as she was still in very good shape. If unsuccessful, they planned to scrap her in Kingston or Newburgh.

Despite plans to tow her south to Newburgh, the late season meant that navigation on the Hudson River closed due to ice before the Powell could be moved, and she spent the winter of 1919-20 at the Sunflower Dock in the Rondout Creek.