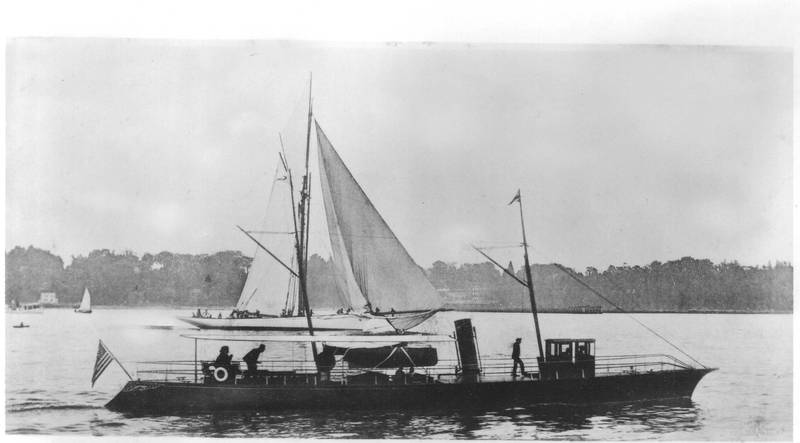 John Herreshoff tried again in June, 1889, with the steam yacht Now Then. At 86 feet long, the schooner-rigged yacht was propelled by a bronze screw. The “race” was similar to the one with the Stiletto – the Now Then met the Mary Powell in the river as she was on her regular passenger route. Coming abreast with the Powell at West Thirty-Fifth Street, the Now Then steamed up to Irvington, reportedly beating the Mary Powell by eight minutes. At Irvington, the Now Then waited for the Albany, which was headed south to New York City. From Irvington to Yonkers, the Now Then beat the Albany by a quarter mile. Was either passenger steamboat aware they were being raced? Not according to Captain Anderson.

“’The Mary Powell is not a racing machine,’ said Captain Anderson to me yesterday as we sat in the little office where his father’s figure was so long familiar and where hangs a portrait of his late brother, Jansen, who was one of the most popular steamboat men on the Hudson – ‘and it must be taken into consideration that against a flood tide and a head wind a big vessel like the Mary Powell, loaded, too, with passengers, is badly handicapped.

‘I’m not making excuses for my steamer; but I nevertheless think it unfair to hear it said that we were in a race when we were not, for we had no warning whatever that the Now Then would tackle us. If these people do want to race so badly, why don’t they do it in the fall of the year, when passenger traffic is over and we can get into racing trim?’”

These were the questions Captain Eltinge Anderson posed to a report from the New York Herald about the race. And Anderson certainly had a point. A vessel a third her size and carrying almost no passengers was bound to have an unfair advantage. But the debate about speed raged on.