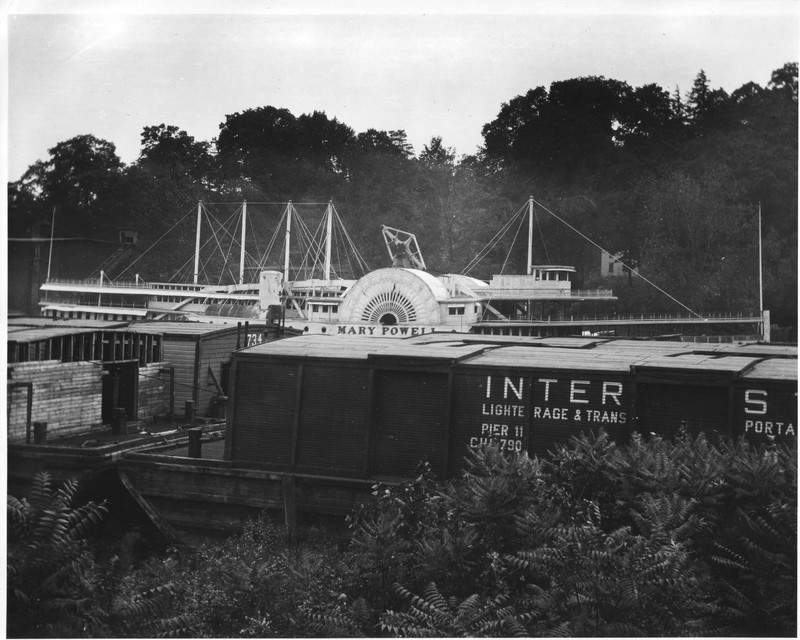 In January of 1920, the Mary Powell’s engine was sold for $3,300 to be used to power a saw mill, although she was frozen in at the Sunflower Dock and the engine would not be removed until spring. Despite plans to move her south, Cohen and Levinson did not do so, and in April of 1920, Kingston local John A. Fischer purchased her. Fischer had her towed up to Connelly, and a month later, a for sale notice appeared in the Sun and New York Herald for both the Mary Powell and Fischer’s yacht. Apparently it had no buyers, because by June the Powell was still at Connelly.

In July, the management of Bear Mountain had reportedly purchased they Mary Powell’s great bell, for use as a fog bell. Bear Mountain was a major tourist destination and had busy steamboat docks at the foot of the mountain. After another season of no takers for the vessel, by October, John Fischer had purchased the Harcourt & Terry property in Connelly, and started to scrap the boat.

"For sale, secondhand lumber, etc." Adverisement placed by John Fischer in the Kingston Daily Freeman multiple times between 1920 and 1923. This particular one is from January 3, 1923.

That fall and throughout 1921 and 1922 and into 1923, Fischer attempted to sell “Sawed wood and second hand lumber, windows, doors, toilets and lumber urinals off Mary Powell.” By May, 1922, newspapers were reporting that all of her copper, engines, boilers, “everything except her rudder” had been stripped, but her superstructures were still intact and could “accommodate a thousand people housed and protected from the weather.” In June, 1922, Fischer donated a 50 foot flag pole from the Mary Powell to the newly constructed baseball diamond at the Kingston Fairgrounds. 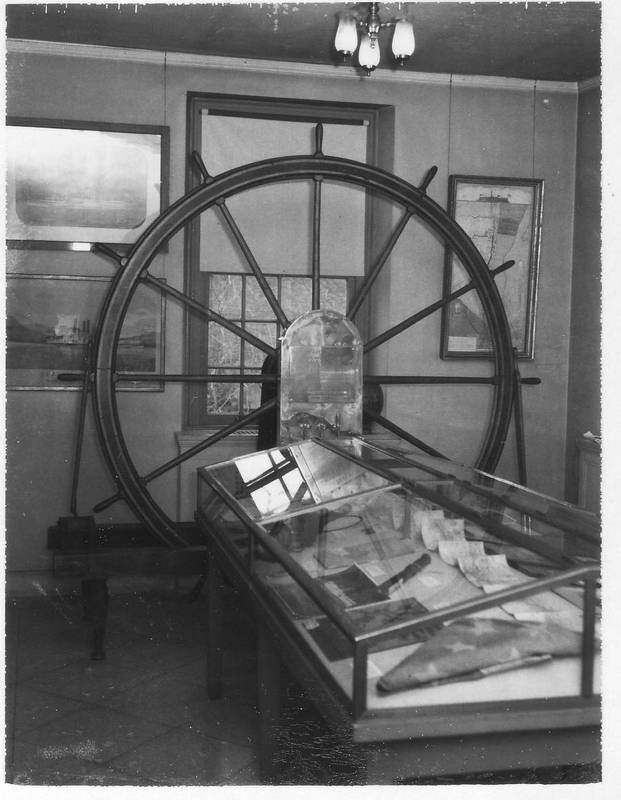 In 1941, the New Lebanon Echo recounted where many scraps ended up. “During the dismantling of the ‘Mary Powell’ many people, for one reason or another purchased various parts of the old steamboat. All traces of many sections have disappeared, but the existence of some parts are known to the writer. The pilot wheel of the ‘Mary Powell,’ in which was a familiar instrument, in the educated hands of Gurnsey Betts, who guided her upon her course up and down the river for many years, was purchased by the late Robert L. Rodie, and presented to the Senate House Museum at Kingston, N. Y. 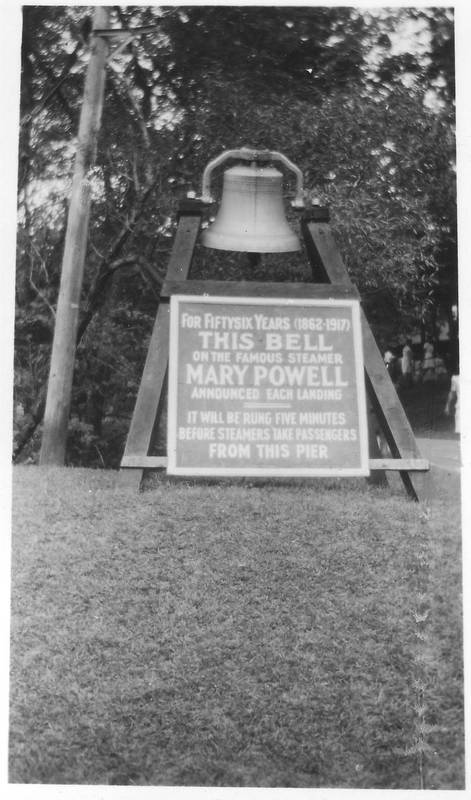 “Henry Ford’s Museum at Dearborn, Michigan contains the blower engine, piston rods, capstan, and one or two other parts of the old river queen. Down at Indian Point, as the vessels of the Day Line come into dock, the bell of the ‘Mary Powell’ rings a welcome over the water. At Highland Falls, New York, atop the gate posts of the J. P. Morgan Estate, shine the two gilt balls which was once reflected in the waters of the Hudson River from the top of the masts of the ‘Mary Powell.’ Aaron Cohen of Kingston purchased the main saloon stairway of the vessel, and at Connelly, Mr. Fisher built a small house from the wood of the steamboat. The house has one of the name boards with the name Mary Powell fastened across its front, and can be seen from the west side of the Rondout Creek. Two panels and a door from the old ‘Queen’ are a part of the furnishings of the summer home of Henry P. Eighmy at Shady, N.Y., while the forward stairs were purchased by ‘Tom’ Hillis, and installed in his home at Rondout. As the steamer ‘Robert Fulton’ sails the Hudson River, us old rivermen again hear the ‘Mary Powell’ blowing for a landing, for the deep-throated whistle of the famous vessel is in service on the ‘Fulton,’ and continues to echo from the Highlands of the Hudson River, where once the ‘Mary Powell’ sailed in ‘Queenly’.” 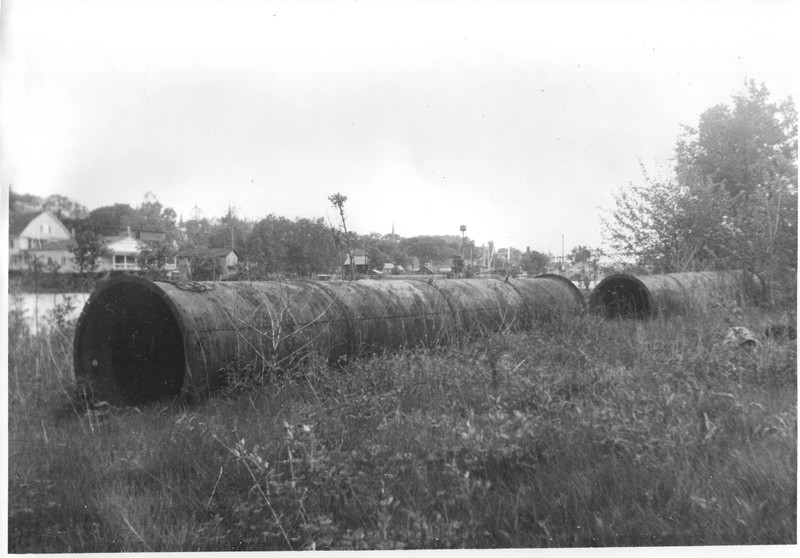 Eventually, even her upper decks were removed, and the bulk of her hull was left to sink into the mud. According to steamboat historian Donald C. Ringwald, in the seminal book he wrote on her, The Mary Powell, “The tall smokestacks lay on the wharf until 1938, when they were sold for use as conduits. The walking beam, which had fallen into the mud, was not removed until 1947, when the lighter William S. Keeler, then engaged in recovering junk metal, hauled it out. Over the years the last resting place of the Mary Powell was marked by a near-by cottage, built from her woodwork and adorned by the name from the front of her pilothouse. In 1957 sparks from a bonfire accidentally ignited the dry wood and the little building was destroyed.” 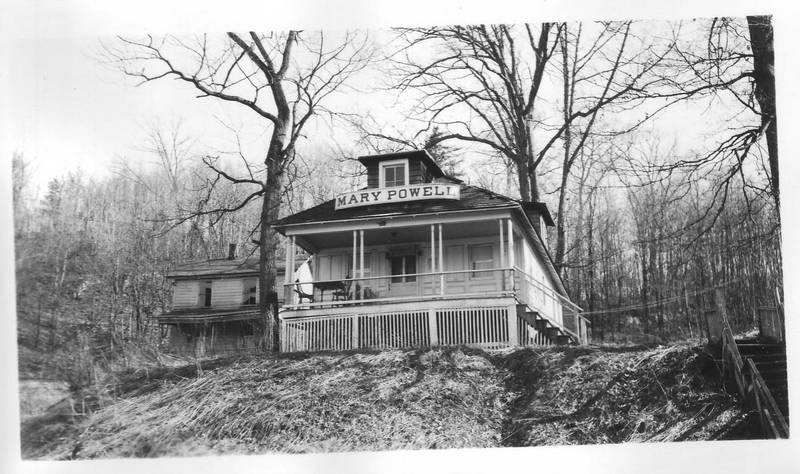 Cottage constructed of timbers from the Mary Powell, with her nameboard over the porch, located in Connelly, NY. Donald C. Ringwald Collection, Hudson River Maritime Museum.

Between 1920 and approximately 1926, the Mary Powell was thoroughly scrapped. These photos illustrate some of the chronology of her decline. 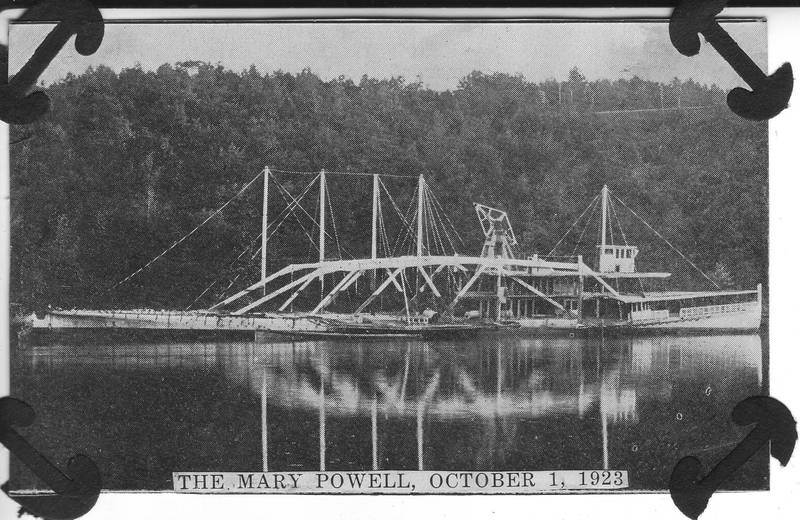 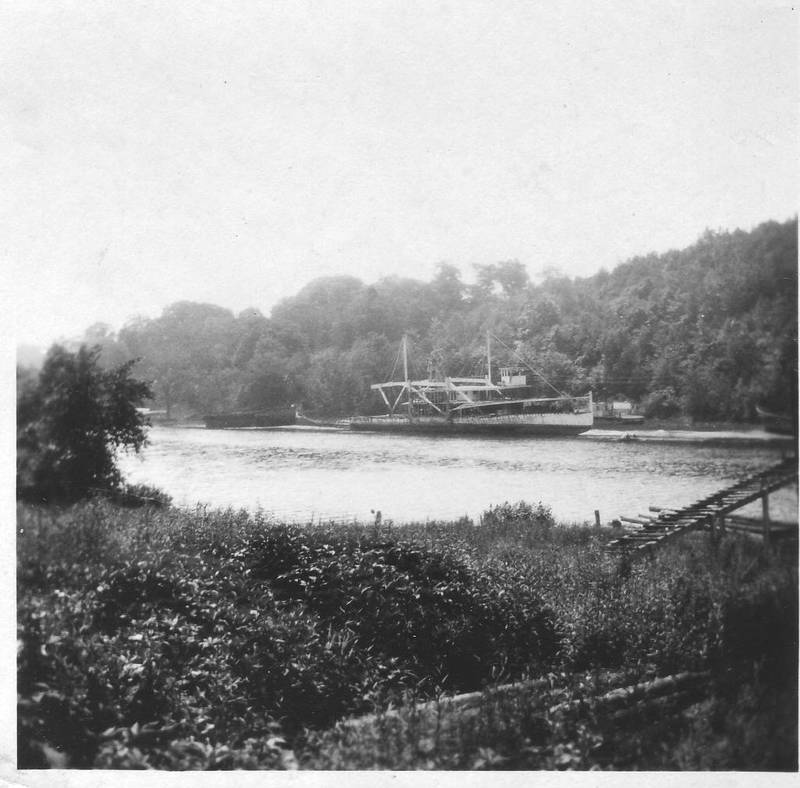 From the Boston Herald, May 3, 1925 – “All that remains of the S. S. Mary Powell, the ‘Pride of the Hudson.’” Shows the Mary Powell in process of being scrapped. Donald C. Ringwald Collection, Hudson River Maritime Museum. 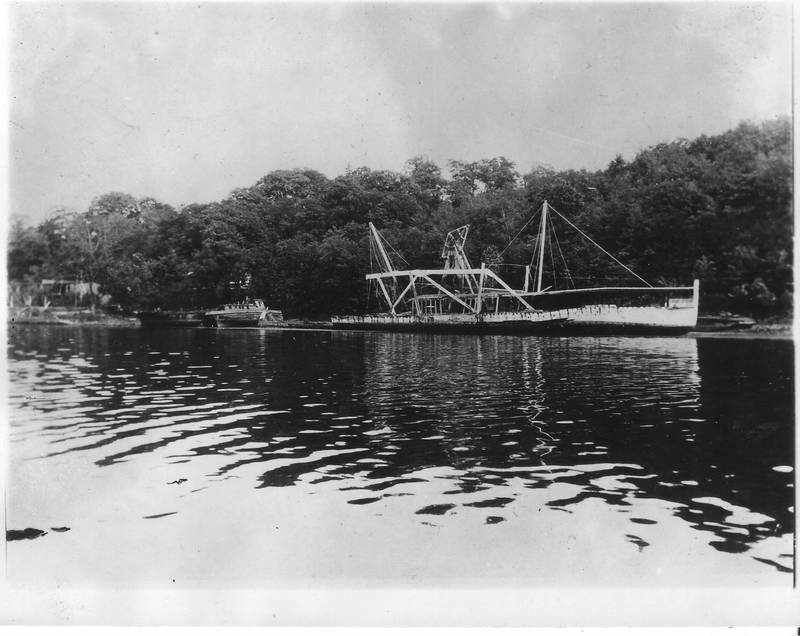 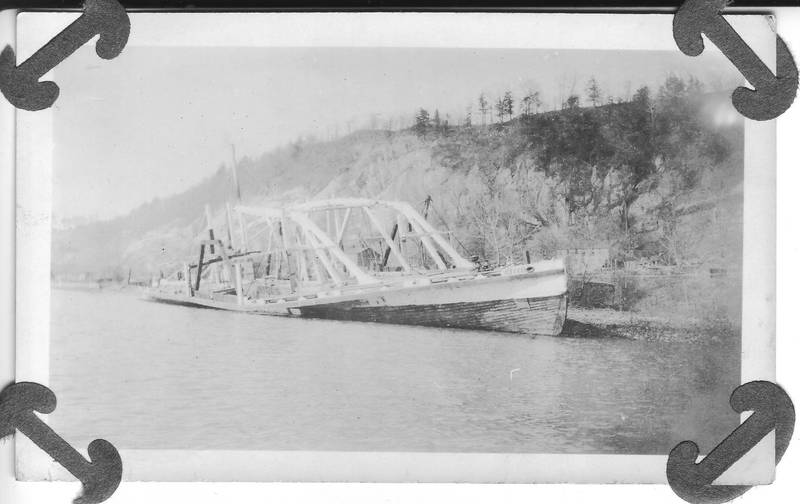 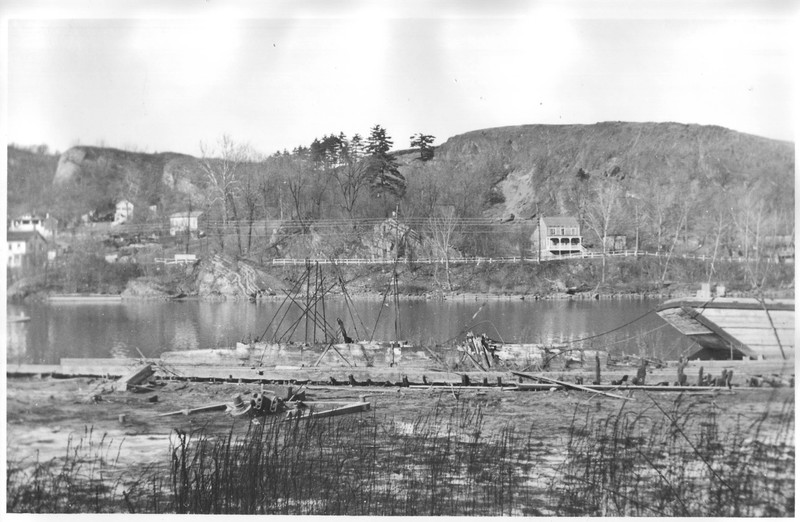 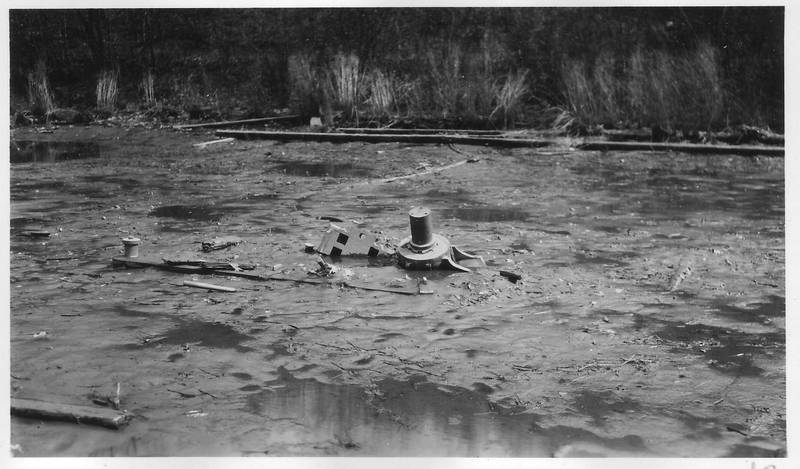 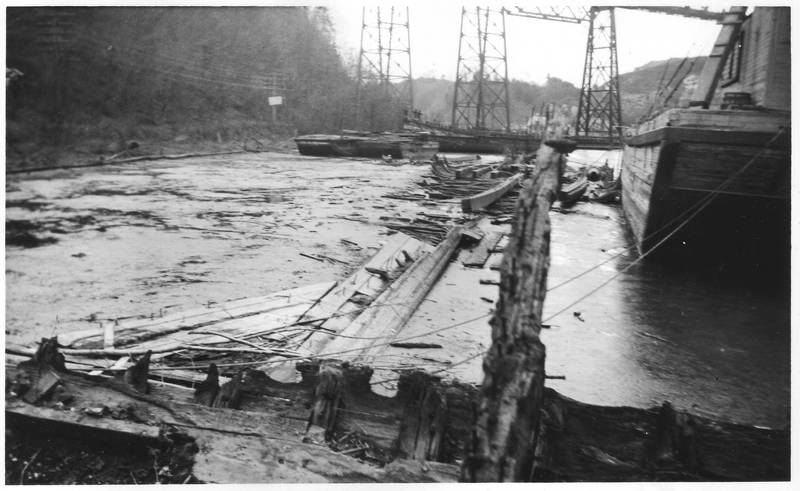 Taken out of service in part due to her wooden hull, that was eventually all that was left of the Mary Powell. Indeed, the outline of her hull, sunken in the mud, can still be seen at low tide just east of the Rondout railroad bridge, on the south side of Rondout Creek. But the legend of the Mary Powell lived on.