The Buying and Selling of Enslaved Individuals 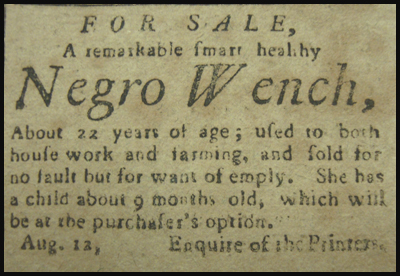 For Sale Notices and Receipts

Found in most daily newspapers and periodicals, slave sale notices were the common means by which the sale of an African slave was advertised. Appearing alongside advertisements for land, houses, and farm equipment, these notices convey the status of African slaves in early American society as merely property. Often using words such as “healthy,” and  “stout,” these advertisements illustrate a process of dehumanization in which African men, woman, and children are described with the same language used to sell livestock.

In this Slave Notice, we see similar notions at work. Described as a “remarkable smart healthy Negro Wench,” a nameless human being and nine-month-old child were on the open market. It is crucial to note that the baby is sold at the “purchaser’s option,” potentially separating mother and child with the simple stroke of a pen.

View all "for sale" notices 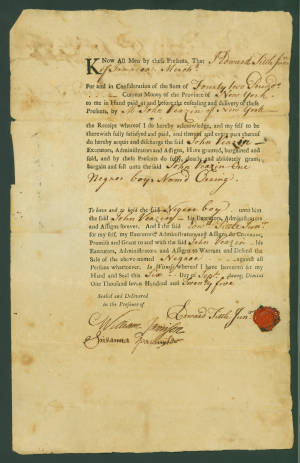 Receipt for Sale of Orring

In September of 1725, a young man, named Orring was sold by Edward Tittle Jr. of Jamaica, to John Vearin for the sum of 42 pounds. The receipt was signed by Edward Tittle and includes his seal which was notified in the  presence of William Jamison and Sinsama Parawyter

View details of this document 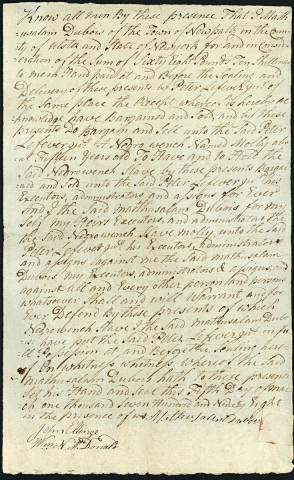 Transfer of Ownership of Bondsmen or Bondswomen

As found in the exchange of the most common goods and services, the buying and selling of African slaves was most readily documented using receipts and Bills of Sale. Mundane in their composition, these legally binding contracts are comparable to Bills of Sale found for the exchange of textiles, household goods, and livestock. It is the clinical and legalistic nature of these documents that reveals the accepted attitudes towards the value of an African life. While phrases such as “to have and to hold” conjure thoughts of marriage, it is important to recognize that this language was used for no other purpose than to protect the seller and the purchaser in the exchange, and cement the transfer of ownership. Such is the case in this Bill of Sale, documenting the exchange of fifteen-year-old “Negro Wench Molly” to Peter Lefever from Mathusalem Dubois for the sum of sixty-eight pounds and ten schillings, dated March 5th, 1798. This value in 1798 is roughly equivalent to $1,300 today.

View all bills of sale 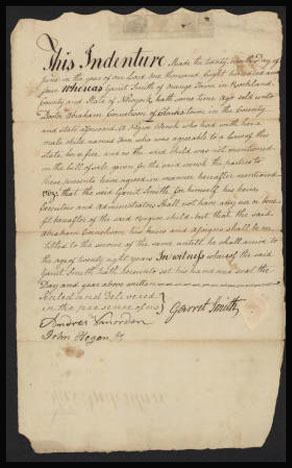 The 1804 Indenture of Tom to Abraham Cornelison

This Indenture Made the twenty- ninth Day of June in the year of our Lord one thousand Eight hundred and four whereas Garrit Smith of Orange Town in Rockland County and State of New York hath some time ago sold unto Doctor Abraham Cornelison of Clarkstown in the County and state aforesaid a Negro Wench who had with her a male child named Tom who was agreeable to a Law of this state born free and as the said child was not mentioned in the bill of sale given for the said wench the parties to these presents have agreed, in manner hereafter mentioned viz: that the said Garrit Smith for himself his heirs, Executors and Administrators shall not have any use or bene- fit hereafter of the said negro child but that the said Abraham Cornelison his heirs and assigns shall be entitled to the service of the same until he shall arrive to the age of twenty-eight years In Witness whereof the said Garrit Smith hath hereunto set his hand and seal the say and here above written -------------

Sealed and Delivered in the presence of us. Garret Smith Andres Vanorden John Hogan Jr.

← The Conspiracy
Ledgers →
The Buying and Selling of Enslaved Individuals