← The Society for Negroes Unsettled
The Sale of a Slave → 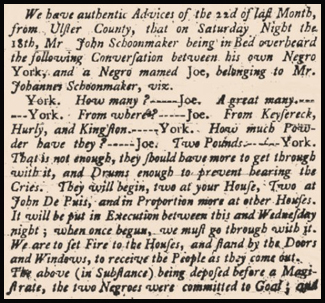 To any slave master of the 18th or 19th century, the fear of slave revolt was the most potentially dangerous prospect. Especially following such violent resistance occurrences like the revolt led by preacher Nat Turner of Virginia in 1831, resulting in the murders of countless enslavers and their families, slave owners now had to fear that their slaves would bind together and attack them. This fear is most readily illustrated in the very law codes that governed New York, in which it is stated explicitly that:

"All and every Negro Indian or other slave, who after the publication of this Act shall murder or otherwise kill... or conspire or attempt the Death of any of Her Majesty's liege people...shall be convicted of three or more of Her Majesty's Justices of the Peace...he, she, or they, so offending shall suffer the pains of Death."

These fears were realized during the pre-Revolution years in the Mid-Hudson Valley. Amidst the fervor of the movement towards independence from Great Britain, so too were African enslaved peoples of the Mid-Hudson Valley motioning for a reassessment of the accepted power structure. As A.J. Williams-Meyers aptly states, "African slaves in the vicinity of Kingston sought to get the edge by striking a blow for their own freedom."

"We have authentic Advices of the 22nd last Month form Ulster County, that on Saturday Night the 18th, Mr. John Schoonmaker being in Bed overheard the following Conversation between his own Negro York, and a Negro named Joe, belonging to Mr. Johannes Schoonmaker, viz. York. How many? - - - - - Joe. A great many. - - - -York. From where? - - - -Joe. From Kysereck, Hurley, and Kingston- - - -York. How much Powder have they? - - - - Joe. Two Pounds - - -York. That is not enough, they should have more to get through with it, and Drums enough to prevent hearing the Cries. They will begin, two at your house, Two at John De Puis, and in Proportion more at other houses. It will be put in Execution between this and Wednesday night; when once begun, we must go through with it. We are to set fire to the Houses, and stand by the Doors and Windows, to receive the People as they come out. The above (in Substance) being disposed before a Magistrate, the two Negroes were committed to Goal; and

together with several other Negroes, examined next Day before four Magistrates who met for that purpose, but no further Discoveries could be made. A Letter from said Place, names Marbletown, as well as the these mentioned , and that the Negroes, were to be divided into parties, to fire the Houses, cry fire, and Kill the People as they come out. The Motive for this Conspiracy, was the Recovery of their Freedom. A large Quantity of Powder and Ball was found with several Negroes, and there are said to be Advices in Town, that besides the two Negroes before mentioned, seventeen or eighteen more have been committed to Goal. A Report has likewise been current in Town for a Day or two past, that these Negroes were to be joined by five or six Hundred Indians, but it does not appear that there is any good Foundation for the Report. From Jamaica, on Long Island, we are also informed, that several of the Negroes of that Place, were last Week committed to Goal there, on account of a Conspiracy said to have been discovered among them to destroy the white People; and we are told most of the Slaves for many Miles round are concerned in the Plot."