← Images of Education in the Hudson Valley
Attitudes and Stereotypes → 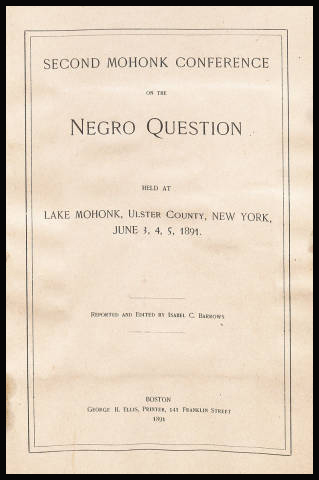 The Negro Question Conference took place at Lake Mohonk, June 3-5, 1891. This conference was one of two held at Lake Mohonk dealing with the situation of the African American population and the means through which improvement in that situation could be improved. The first conference took place in 1890. Attendees included statesmen, prominent leaders in education and in the ministry.

PREFACE. THE Second Mohonk Conference on the Negro Question was held, by invitation of Mr. A. K. Smiley, at Lake Mohonk, Ulster County, N.Y., in June, 1891. There was a good attendance from various parts of the country, and much interest was manifested. The report herewith presented contains the papers which were read and abstracts of all discussions. The desirability of making the report as compact as possible has led to the condensation of many speeches; but no important facts or points have been omitted. This is in accordance with the following vote of the Executive Committee: - Voted, That, inasmuch as funds for printing are coming in very slowly, the Publishing Committee be instructed to confer with Mrs. Barrows with reference "to the reduction of the report, so as to bring the cost of printing within the funds which may be in hand. The Platform adopted by the Conference will be found on page 109. The officers of the Conference are especially desirous of securing a body of facts concerning the condition and needs of the Negro, and will be glad if those who have such facts in their possession will communicate with the founder and host of the Conference, Mr. A. K. Smiley, or with any of the Secretaries. The next Conference on the Negro Question will be held in June, 1892. 259420

View the entire transcript of the conference.