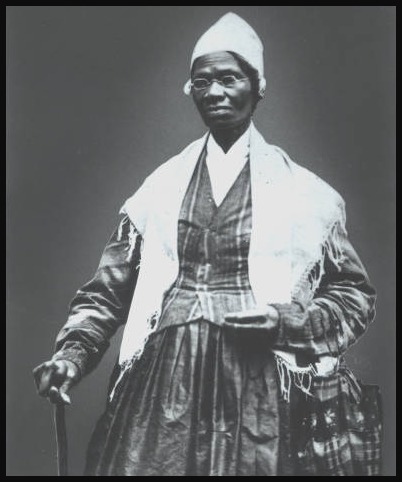 Sojourner Truth (1797-1883) traveling preacher and lecturer, abolitionist, and women’s rights supporter. Born into slavery in Ulster County, New York sometime around 1797 as Isabella, Sojourner Truth knew first hand the atrocities of slavery. She was separated from her parents James and Elizabeth with the death of their first owner when she was nine years old. Following the death of Charles Hardenbergh, young Isabella was sold to the Neely family. They only spoke English. She only spoke Dutch. As a result of the language barrier she was repeatedly beaten. Within a year she was again sold, to the Shriver family, where she was again sold within two years to John Dumont, where she remained enslaved until 1826. It was with Dumont that she received beatings so brutal that the scars remained for the rest of her life.

Dumont and Isabella had created a deal for her early freedom in light of the New York manumission law created in 1817 that demanded all slaves 40 years or older be freed. Any slaves under 40 would be kept another ten years until 1827 and then freed on July 4th. Isabella and Dumont had supposedly agreed that she would be granted freedom in 1826, but when the time came Dumont refused to free her. Isabella then left, taking only infant Sophia with her, to the neighboring Van Wageners, who were abolitionists. When Dumont came to collect her and her child, they paid him a total of $25 to secure her freedom for the remaining months until 1827.

Living with the Van Wageners, whose last name she took later on, she learned about abolition. She filed a law suit against the man who bought her five year old son Peter, citing the fact that the abolition law demanded all enslaved peoples after 1827 to be freed. Peter was illegally sold by Dumont to an Alabaman enslaver. Peter was delivered to the enslaver by a man named Solomon Gedney. Huguenot descendent Abraham Bruyn Hasbrouck and his law partner took up Truth’s case without charge, according to historical records. In 1828, Truth became the first black woman in American history to take a white man to court, and win. Gedney was charged $600 for bond, and the Alabama enslaver was forced to release Peter to the custody of his mother.