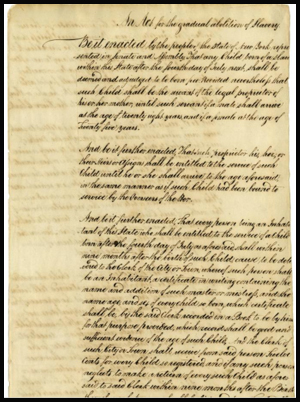 Beginning in the 1770's, a series of laws were passed in New York which gradually gave African slaves more freedom, culminating in the Manumission Act of 1799. Set to the backdrop of the move towards American independence from British rule, this gradual abolition of race-specific slavery was, perhaps, part of the general climate of liberty and freedom, which had become so much a part of life in the colonies. Amid an ideological crusade towards independence from British colonial hierarchy, the enslavement of African slaves most certainly would have appeared slightly hypocritical to some. While nominally, the African slaves of the mid 19th century would gradually gain their freedom, for the majority of the recently freed African-Americans, the reality of their situation would have been only a slight improvement from the legal subjugation they would have just been shackled in.

According to Edgar McManus:

What happened to the Negro in New York after emancipation forms one of the darkest chapters in the history of the state, emancipation did not bring real freedom. It brought only the exclusion of the Negroes from the occupations and skills they had mastered under slavery. The slave system of New York was characterized by a high degree of specialization and division of labor which enabled Negro slaves to compete effectively with white workers. These skills were systematically destroyed after emancipation as Negroes were excluded from one occupation after another. Thus the Negro was deprived of what he had so painfully achieved under slavery; the opportunity and ability to earn a livelihood for himself. The disastrous outcome for the Negro mocked the freedom which emancipation was expected to bring. (A History of Negro Slavery in New York, 1971) 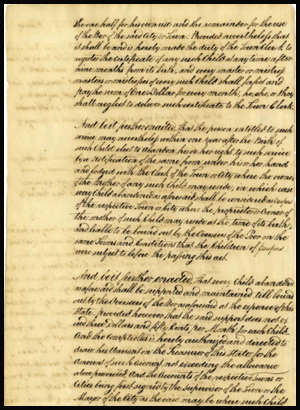 This provision was essentially a compensated abolition scheme that allowed slaveholders to abandon children, and then receive them back into their own homes as borders (servants) in exchange for which they would receive monthly payments from the overseers of the poor. Masters received both monthly payments and the daily services of children. (Kruger, 1985, pp.819-822)