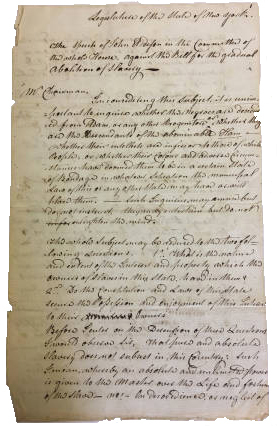 Senator John Addison of New York gave a speech to the New York State Legislature arguing against the gradual abolition of slavery. His speech, totalling more than nine pages, had several references to the Bible and the Code of Laws as follows:

"In the Code of Laws which God delivered to Moses from Mount Sinai for the Government of the Children of Israel after their settlement in the Land of Canaan - is the right of their purchasing bond men and bond maids from among the Heathen round about them, who should be theire absolute property and descend to their children as an Inheritance and by their possession..."

Addison also used the Constitution and the Laws of the State to support his position that slaves were property.

According to the 1790 Federal Kingston Census, John held six enslaved Africans at his residence.

View this document with its transcription