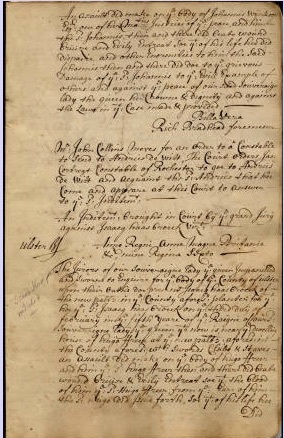 The following document demonstrates the prejudiced justice system when trying white and black men of Ulster County. Isaac Hasbrouck of New Paltz was accused of assaulting Hugo Freer. He beat, wounded, and bruised Hugo Freer so that his ear bled. Hasbrouck pleaded guilty and threw himself upon the Court. He was ordered to pay 20 shillings.

During the same session, a slave named Pierro from the Town of Rochester in Ulster County was accused of a similar crime, assaulting Catrina Cortregt. He plead guilty and threw himself upon the court. The court ordered that he be publicly whipped ten times upon the naked back at every corner of the Town of Kingston. He was also ordered to pay all costs and to remain in custody until the costs could be paid.

This court case demonstrates another issue that persists as a determining factor for punishment in the U.S. criminal justice system: the accusations by white women of assault by black men. Catrina Cortregt was a white woman, accusing a black man, Pierro, of assault. Whether the assault actually occurred or not, we cannot know, but this is a common narrative in American history. The intense punishment also reflects the pedestal on which white women were placed, as their accused black male assailant is made a brutal example of, showing the public that a black man, even an innocent black man, will face severe punishment for even the thought of assaulting a white woman.