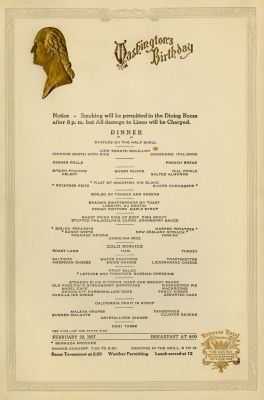 A gold-embossed profile portrait of Washington sets a presidential tone for this holiday menu printed on thick cardstock. Although this menu is for the Princess Hotel in Bermuda, most of the winter guests at the hotel were Americans who would have wanted to celebrate the holiday.

That night, guests may have listened to President Coolidge deliver his Washington's Birthday speech, broadcast over the radio to the largest audience yet. He announced the upcoming celebration of Washington's 200th birthday in 1932, and responded to controversy over the apparent discrediting of Washington's greatness in recent biographies:

"While many excellent books, often scholarly and eloquent, have been written about him, the temptation has been so strong to represent him as an heroic figure composed of superlatives that the real man among men, the human being subjected to the trials and temptations common to all mortals, has been too much obscured and forgotten. When we regard him in this character and have revealed to us the judgment with which he met his problems, we shall all the more understand and revere this true greatness. No great mystery surrounds him; he never relied on miracles. But he was a man endowed with what has been called uncommon common sense, with a tireless industry, with a talent for taking infinite pains, and with a mind able to understand the universal and eternal problems of mankind."