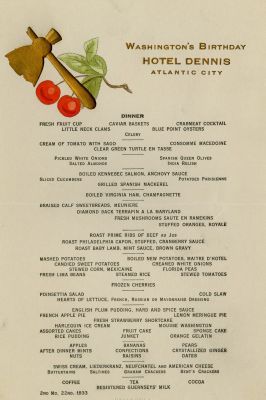 When we think of George Washington, many of us probably recall the moralizing tale we were told in grade school: George Washington chopped down his father's cherry tree and, admitting his wrong, said, "I cannot tell a lie." His father responded, "Such an act of heroism in my son is worth more than a thousand trees, though blossomed with silver, and their fruits of purest gold." The story of Washington as hero was told by Mason Locke Weems and first appeared in his 1800 biography which was published a year after Washington's death.

This dinner menu for Washington's birthday at the Hotel Dennis in 1933 depicts a symbolic hatchet (here, embossed in gold) and two bright red cherries. The food choices for this meal are no different than any other day, except for the additional course of "frozen cherries" and a dessert option of "mousse Washington."