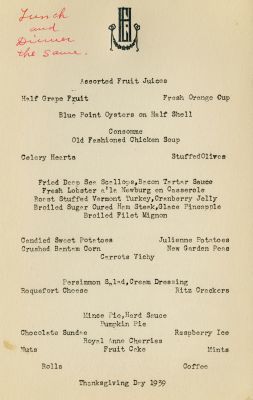 Thanksgiving 1939, also known as "Franksgiving," was probably the most controversial Thanksgiving in American history.  The holiday traditionally fell on the last Thursday of November, but in 1939 there were five Thursdays and Thanksgiving would have then been on November 30th. It was the end of the Great Depression, and at the time it was considered inappropriate to begin Christmas sales before Thanksgiving. Businesses were worried that the Christmas shopping season would then be too short and revenues too small.  So President Franklin D. Roosevelt moved Thanksgiving to the second to last Thursday so the Christmas retail season could start earlier. It was an unpopular (and last minute) decision that disrupted many people's plans (and calendar makers were furious!). 1940 and 1941 followed suit and the holiday was celebrated on the second to last Thursday (but with only four Thursdays, it ended up being much earlier in the month).  After a joint resolution from Congress, Thanksgiving in 1942 (and thereafter) was celebrated on the fourth Thursday of the month.  But there is no shame these days in advertising and shopping for Christmas before Thanksgiving -- this year we started seeing ads in September!