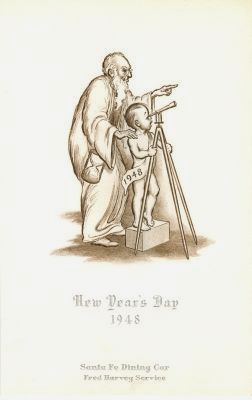 To bring in 1948, Father Time rests a hand on the Baby New Year's shoulder and points into the distance as the Baby looks through a telescope. This New Year's Day luncheon menu for on board The Scout, a passenger train of the Santa Fe Railway, was a typical a la carte railroad menu with choices from several courses, not unlike what would be served any other day of the year.

The dining car was run by the Fred Harvey Company, which provided many dining cars with service as well as operating its chain of Harvey House restaurants located at railroad stops along the route. It turned out that this would be the last New Year's luncheon on board the Scout. Later that year, the train was withdrawn from service. Its last run was on June 7, 1948.