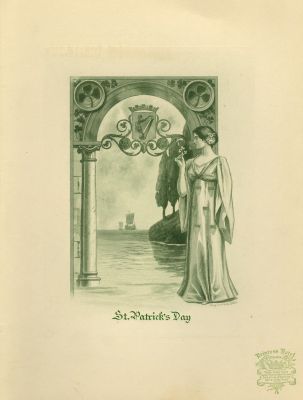 This dinner menu is bound with a green cord and depicts a scene ripe with Irish motifs. The menu itself features the usual dishes of fish, ham, beef, and lamb. A note at the bottom of the menu announces a "Fancy Dress Ball this Evening" and the quip, "Sure its a hoping you'l be after coming wid a bit o' green." The origins of the association of green with St. Patrick's Day (and Ireland) may be rooted in the color of the shamrock and its association with St. Patrick himself.

"It was a fine day. Never had a March 17 shown a sunnier sun, or a warmer, soft haze of coming Spring. The crowds that lined Fifth Avenue solidly--there must have been 200,000--basked in the sunshine. Men with big jaws and bulky shoulders, dressed in their best, with gay bits of shamrock or a bit of green ribbon in their coat lapels, tramped gleefully up and down. Their wives were with them, and their daughters and their sons, and many a typical son of Erin marched with a flag over his shoulder, flanked by wee boys or girls of his brood. There is an enthusiasm about a St. Patrick's Day parade which is lacking in many similar affairs; it is almost a religious function with those who march behind the bands playing the lilting songs of Erin, songs with a tear under their gayety." (New York Times, March 18, 1927)