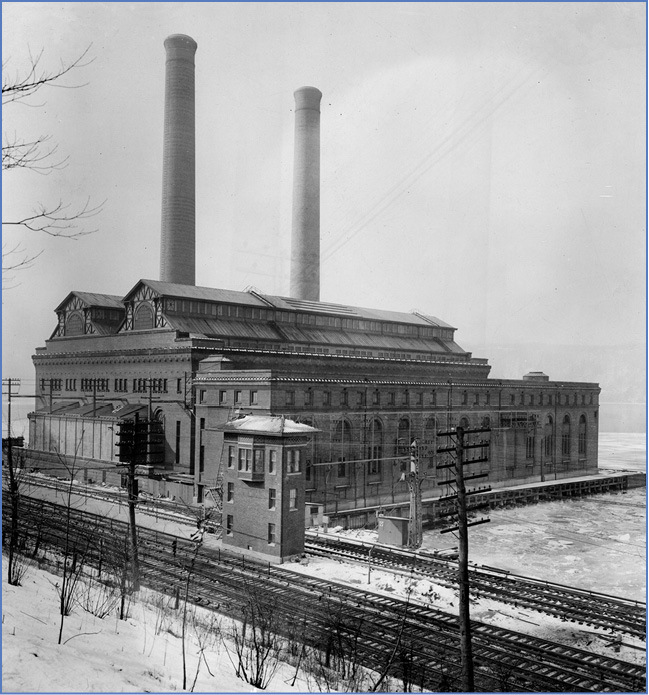 The Glenwood Power Station along the Hudson River in Yonkers. Constructed in 1907, coal-fired power plants like Glenwood generated electricity for streetcars, subways, and more. Museum of Science and Technology.

Starting in the 1900s, New York and other Hudson Valley cities began to be electrified for lighting, trains, and refrigeration. By the 1950s, the use of electricity expanded to include air conditioning and small household appliances. Sometimes demand exceeded the supply. 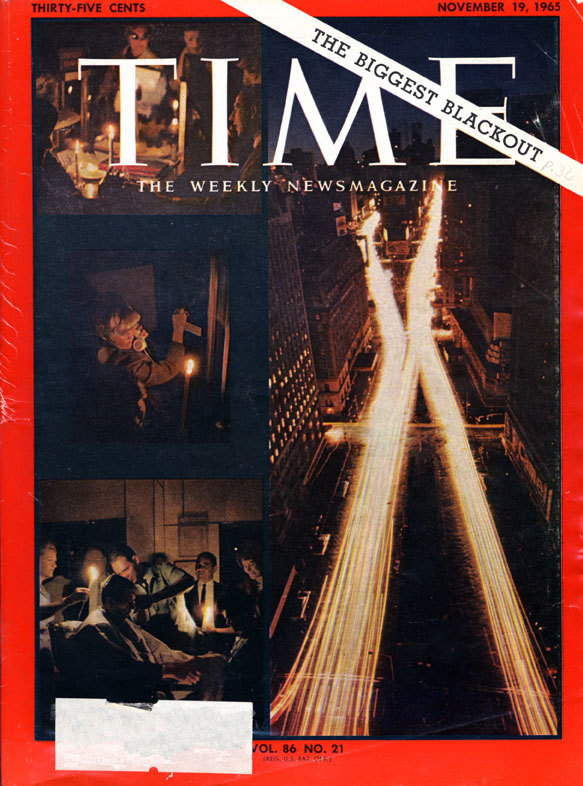 In 1959, 1962, and 1965, New York City experienced blackouts that put the pressure on electric companies like Consolidated Edison (or Con Ed, as it was known), to increase production. New York City also had some of the most expensive electricity rates in the country, adding to calls for expanding the grid. 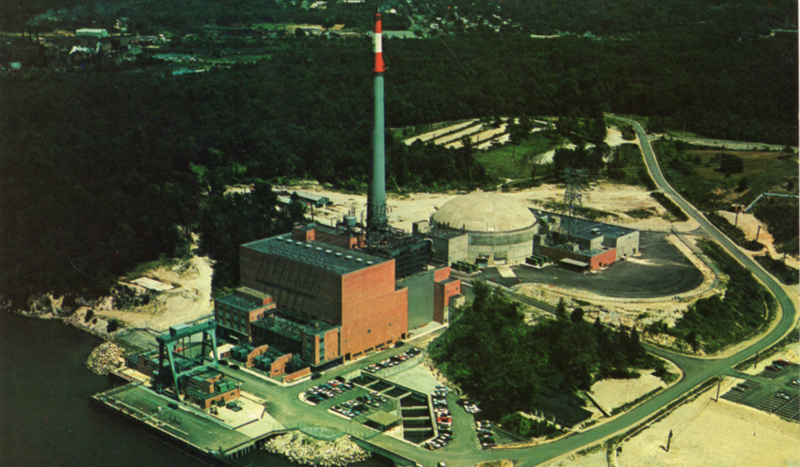 In 1952, Consolidated Edison began a feasibility study on atomic power in New York. In 1954, Con Ed purchased the site of the former Indian Point Amusement Park in Buchanan, NY - just south of Peekskill. Indian Point Nuclear Power Plant was completed in the spring of 1962 and began operations in September of that year. Unlike later designs with their distinctive cement cooling towers, Indian Point drew water directly from the Hudson River. The cooling system’s intake points had the unintended side effect of killing fish eggs, larvae, and small fish by the billions. In addition, hot water was discharged back into the river, killing plant life and more fish. A second reactor was built in 1965 and a third in 1969. 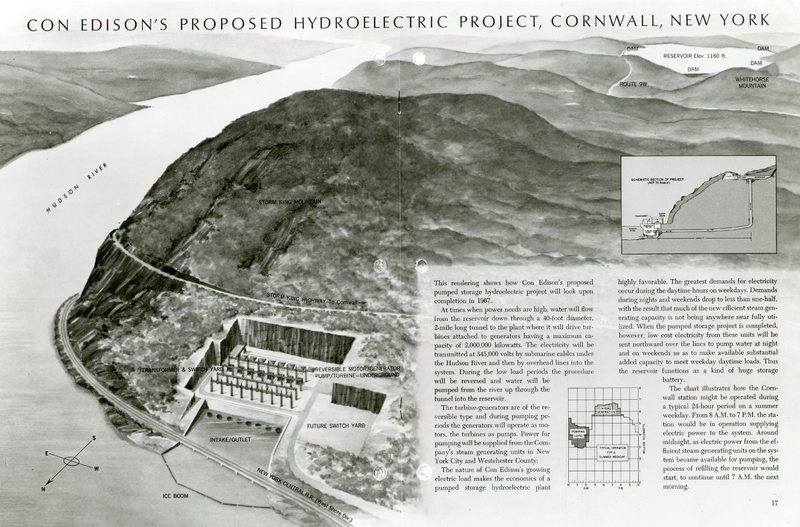 Con Edion's proposed hydroelectric power project at Cornwall, NY. This image, with the power plant cut deep into the side of the iconic Storm King Mountain, shocked the public. Marist College.

On September 27, 1962, Consolidated Edison announced plans for a new hydroelectric pumped storage power plant at Storm King Mountain near Cornwall. The plant was designed to pump water from the Hudson River up to a holding reservoir during times of low demand, such as at night or on weekends. During peak use times, the plant would then release the stored water which, with the help of gravity, would power turbines to make electricity, preventing grid overload. With hydroelectric capacity rivaled only by Niagara Falls and Grand Coulee Dam in Washington State, this new plant was initially hailed as a cost-effective alternative to steam power plants and a boon to industrial development in and around New York City.

Like Indian Point, this power plant would also take water from the Hudson River, and ran the same risk of fish kills. In addition, the original plant design involved cutting into the face of scenic and iconic Storm King Mountain. 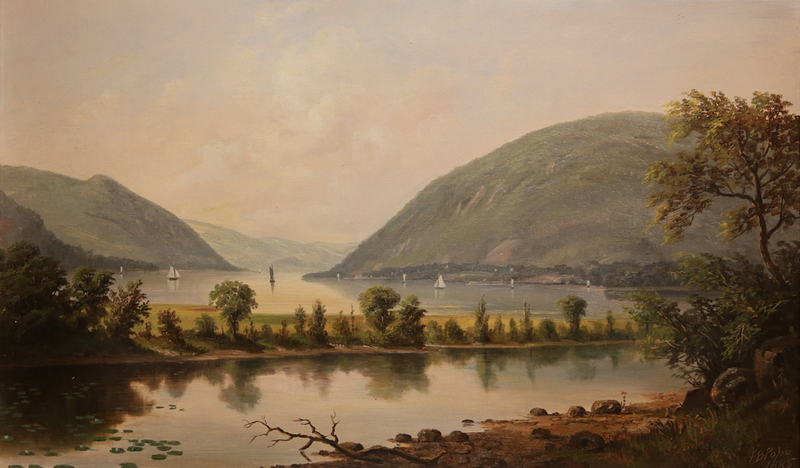 "Storm King" by Thomas Benjamin Pope. This painting illustrates the scenic beauty of the mountain and its value to local residents. New York State Museum. 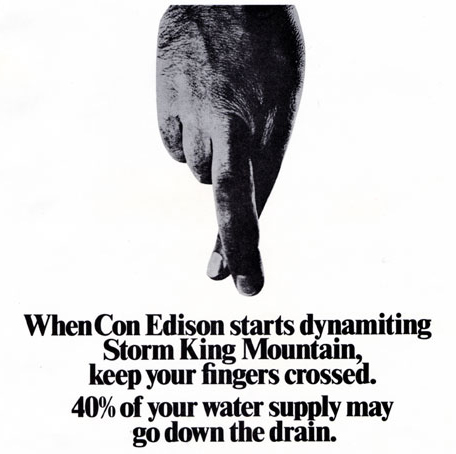 This advertisement by Scenic Hudson was published in the New York Times in reference to the Storm King plant's close proximity to the Catskill aqueduct, which provided drinking water for New York City. Marist College.

When Hudson Valley residents learned that the scenic face of Storm King Mountain was in danger of being spoiled forever, a resistance to Con Ed’s plans began to form. Existing groups, including the Hudson River Conservation Society, began negotiating with Con Ed, but a group that became known as the Scenic Hudson Preservation Conference took a firm stance against the construction of any plant at Storm King. Even when Con Ed changed their plans in 1964 to move the plant inside the mountain, Scenic Hudson remained opposed. The porous nature of Storm King’s bedrock meant a risk of groundwater contamination. In addition, the construction was perilously close to the Catskill Aqueduct, which provided drinking water to New York City. Challenging Con Ed both at Federal Power Authority hearings and in court, Scenic Hudson began a legal battle against the plant that lasted more than a decade. 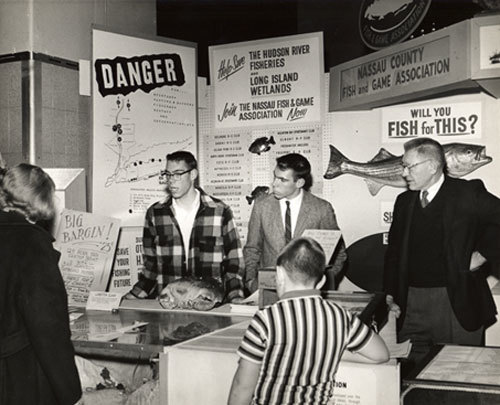 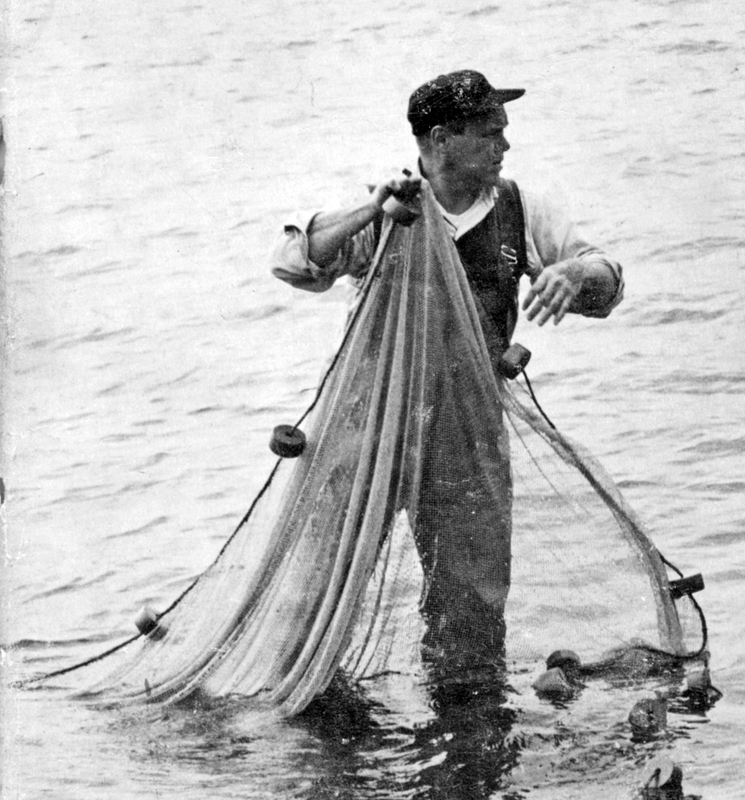 Led by Robert Boyle, a Hudson River fisherman and writer for Sports Illustrated, the Hudson River Fishermen’s Association was an alliance of sport and commercial fishermen. In the April 26, 1965 issue, Bob dropped a bombshell of an article. Entitled “A Stink of Dead Stripers,” the article broke the story of striped bass kills at Indian Point nuclear plant. With assistance from the State Conservation Department, which managed fish and game in New York State, Con Ed employees dumped hundreds of dead striped bass at a local landfill and then buried the photographic evidence. Bob tracked down the photos and published them with his article. In 1966, the Association formally organized to fight the impacts of both Indian Point and the potential impacts of Storm King on spawning grounds and fish populations.

← Playground for the People
Storm King →
Powering the Hudson