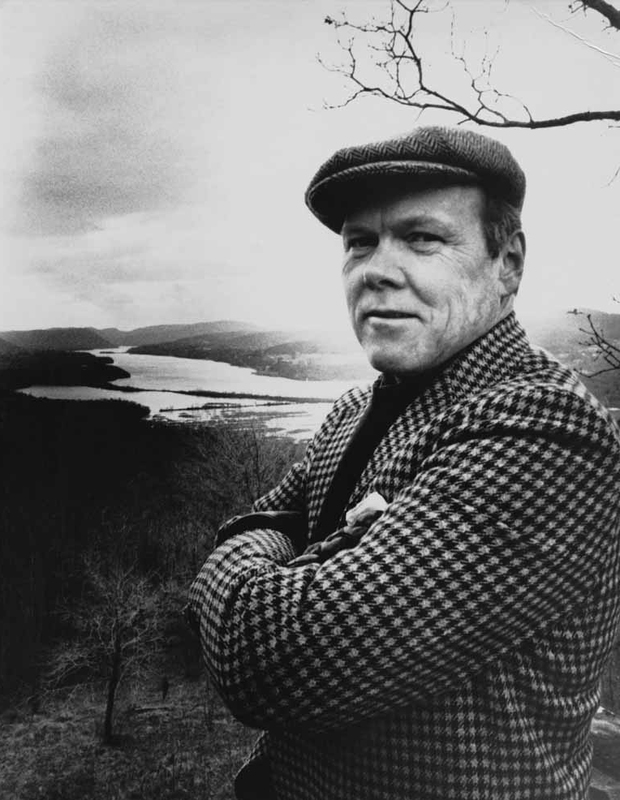 Throughout the 1950s and 1960s, commercial fishermen were noticing a marked decline in fish populations in the Hudson River. Fishing for shad and other herring, sturgeon, striped bass, and other edible fish for New York’s fish markets, these fishermen made their living on the river. Increasing industrial pollutants and loss of fish habitat and spawning grounds were taking their toll on the fish.

In 1966, Bob Boyle introduced the group that would become the Hudson River Fishermen’s Association (HRFA) to an interesting discovery - two laws still on the books that could help their cause - the Federal Refuse Act of 1899 and the New York Rivers and Harbors Act of 1888. Both banned the unauthorized discharge of pollutants and included a bounty for those who reported violations. Here, Boyle realized, was a way to force polluters to change their ways and fund the group keeping an eye on them. 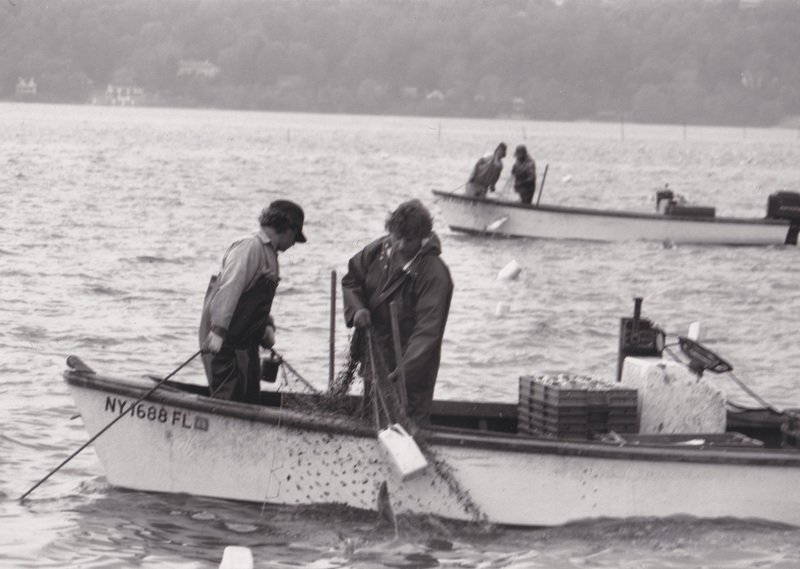 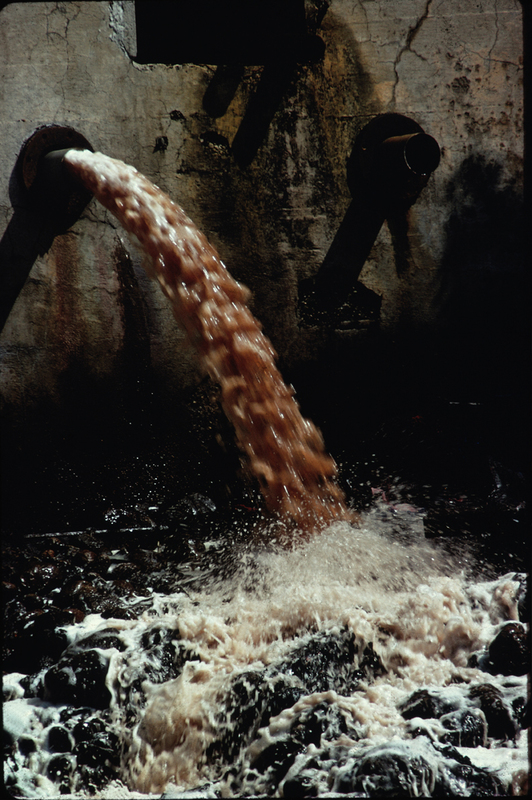 The Pennsylvania Central Railroad yards in Croton-Harmon were a major source of pollution in the Croton River for years. Oil waste was discharged from a large pipe. The oily water killed wildlife and sometimes pose a fire hazard.

The HRFA began to call and write federal agencies to complain. It was an uphill battle, as citizens had rarely taken on large companies before, and federal regulators were reluctant to treat industrial giants with anything but kid gloves. Frustrated, in 1968, HRFA and Congressman Richard Ottinger sued Penn Central and the Army Corps of Engineers. In 1969 the U.S. Attorney sued Penn Central under the Refuse Act of 1899. Penn Central paid only $4,000 in fines and HRFA got $2,000. It was a heady victory that left the fishermen more motivated than ever to clean up the river. 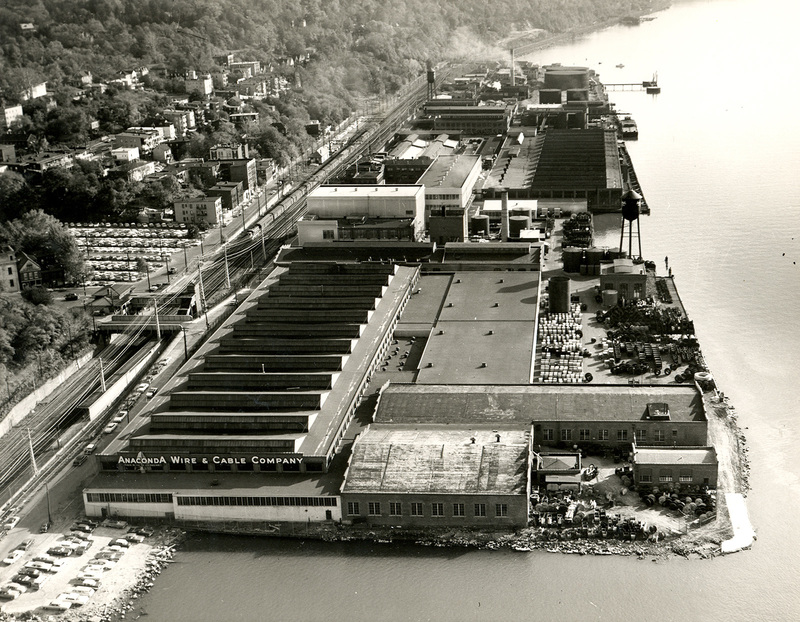 Fred Danback was an employee at Anaconda Wire & Cable Company in Hastings-on-Hudson and also a member of the HRFA. For years he had noticed Anaconda dumping oil, solvents, and other pollutants into the Hudson. Despite years of reporting to the Coast Guard, no action was taken until 1971 when, at the behest of Fred and the HRFA, the U.S. Attorney General sued Anaconda under the Refuse Act. They won the suit and a $200,000 fine - the largest ever. However, only $20,000 of that fine went to the HRFA. The remainder was awarded to the Coast Guard, Army Corps of Engineers, and the Interstate Sanitation Commission. 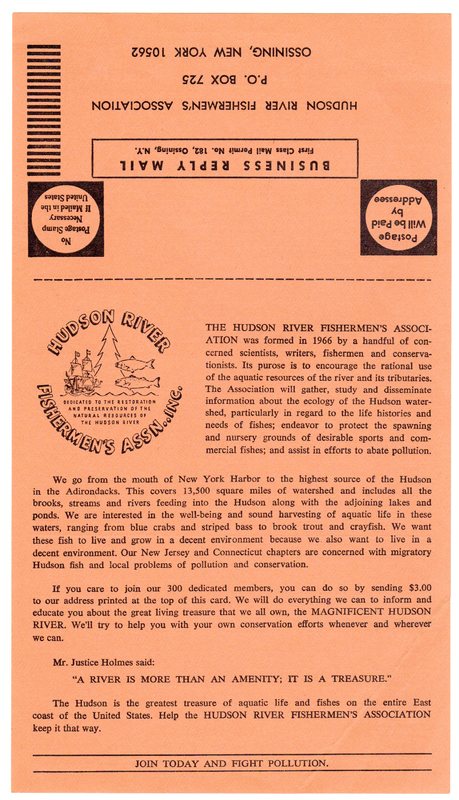 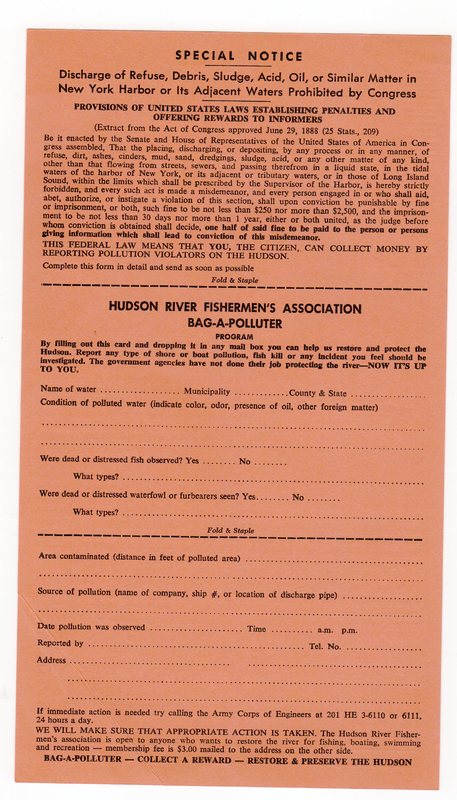 Shortly after their victory against Penn Central, the HRFA started a “Bag-A-Polluter” campaign. Printing the entirety of the Refuse Act on a series of postcards that also called for membership in the Hudson River Fishermen’s Association, the HRFA encouraged ordinary citizens to: “report any type of shore or boat pollution, fish kill, or any incident you feel should be investigated. The government agencies have no done their job protecting the river - NOW IT’S UP TO YOU.” 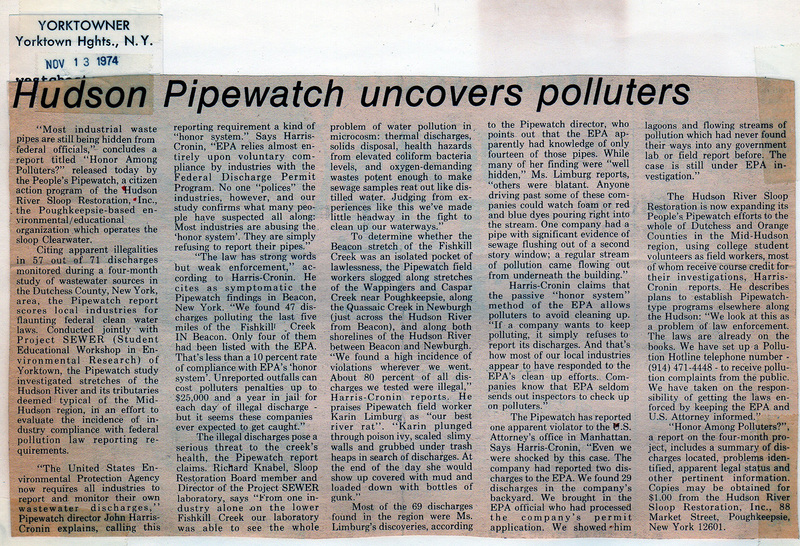 In his 1969 book The Hudson River: A Natural and Unnatural History, Bob Boyle had outlined the idea for a river keeper for the Hudson. In 1972, funded in part by Refuse Act bounties, the HRFA, Hudson River Conservation Society, Scenic Hudson, and the Hudson River Sloop Restoration (Clearwater) banded together to hire Thomas Whyatt to be a river keeper. Based on the British tradition in which a keeper was assigned to watch over trout streams, Whyatt started by walking the shoreline and checking outflow pipes for pollution violations. He quickly enlisted ordinary people in his Pipewatch program.

During the summer of 1974, college intern Karin Limburg and Clearwater volunteer John Cronin combed the shores of Hudson River tributaries. By 1975 funding was scarce, but the dream of a riverkeeper lived on.

← "The Nukes Are In Hot Water"
People's Pipewatch →
Bagging Polluters