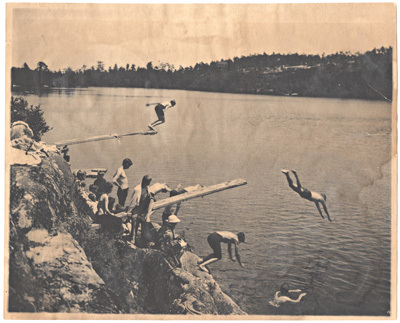 Considered by the campers and counselors to be the most exciting event held each year, the annual Water Sports Day coincided with annual Parent's Day. It was typically the last major event held at Awosting in August before the two-month-long camp ended in early September. The three camp clubs which were given Native American names, the Seminoles, Pequots, and Iroquois, went head-to-head with one another in water-based events such as the four-paddle canoe race, 25 and 50 yard swim, and the canoe tilt, a game that was won by flipping your opponent into the water. Individual boys from each club battled one another in events such as diving, swimming, and canoe events, all of which were carefully coached by the counselors and graded by judges. These events underwent little change from year-to-year despite minor changes in single events, event order, or the number of judges and referees.

Campers from all three clubs were pleased to compete in a “healthy rivalry” that was seen by the counselors as a “perfect delight to the boyhood nature.” Each year, several trophies and honors were awarded to those boys who showed outstanding effort and skill in several categories such as athletics, sportsmanship, and greatest physical improvement. One such trophy, the Water Sports Cup, was set aside for the "tribe" that won the entire event. After the water sports concluded, the campers competed against their visiting fathers on the athletic field in a baseball game that “playfully demonstrated that they had retained their youthful vigor by triumphing over their sons.” In this game of fathers vs. sons, the field position played by each father corresponded with the position their son played throughout camp.

After the game, parents were invited to the “Play Rocks” to attend the annual camp play which hosted a number of different Native American-themed adventure stories, including the Awosting favorite, “The Massacre at Fantine Kill.” The play, which changed from year-to-year, was then followed by a camp fire in which all members and parents gathered around and discussed the highlights of the day. 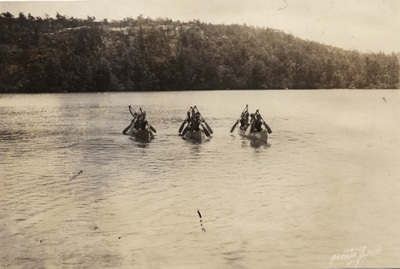