Yoneo Arai was born on August 26, 1889, in New York City. His father, Ryichir Arai, a Japanese citizen, had arrived in New York City in 1876. Ryichir founded the silk export trade between the United States and Japan. To promote closer relations between Japan and the United States, Ryichir formed the Japan Society, an organization which was dissolved during World War II. After many years in the United States, Ryichir decided to put down permanent roots. He imported a wife from Japan, the 18-year-old Tazu Ushiba. Tazu was a beautiful, lively, independent woman. She adjusted well to life in America, quickly becoming a fashionable society wife.

Yoneo was Ryichir and Tazu’s first born and, therefore, one of the first Japanese children born on the East Coast.  Yoneo spent his first two years in New York City. Eventually, the Arai family moved to Riverside, Connecticut. The Riverside house was huge, with a remarkably spacious wrap-around porch. The surrounding property was lushly forested. Ryichir Arai would often play a game of GO (an Asian board game) on the porch, looking out at his very own wilderness.

Yoneo and his sister, Miyo, played with Toyo and Taro Murai, the children of Ryichir’s best friend. Toyo was a blond-haired, blue-eyed girl, who resembled her American mother, Nenne Bailey. Taro was the spitting image of his Japanese father, and some suspected he was really Mr. Murai’s illegitimate son. In 1902, an 11-year-old Yoneo Arai arrived at Camp Awosting, along with Taro Murai. Yoneo was a very serious-looking boy, small for his age, but nonetheless athletic. In the first of his three summers at Camp Awosting, Yoneo won an award for "General Excellence in Water Sports.”

Yoneo’s fellow campers suggested that he attend St. George’s School in Newport, Rhode Island. He applied and was accepted. Years later, Yoneo enrolled in Harvard and graduated with the class of 1912. While at college, Yoneo gathered a group of famous friends, including: Vincent Astor, Sinclair Weeks, William Castle and T.S. Eliot.  After graduating, Yoneo travelled to Japan in search of a wife. He caught an excellent bride—Mitsu Okabe, a cultured aristocrat. The couple had a son, whom Yoneo named Ryo. In 1941, Yoneo, age 52, filled out a draft card. At the time, Yoneo was employed at Morimura Brothers. Morimura Brothers was, and still is, a Japanese trading company which deals in ceramics, aircraft materials, metals, industrial raw materials, chemicals, household goods, etc. The company was founded on the lofty principles of universal brotherhood, integrity, and thrift. Yoneo was appointed vice president of the Japan Society after World War II.  Yoneo’s son, Ryo, also attended Harvard and served in the army during World War II. Ryo became a book publisher, moved to California, did not marry a Japanese wife, and had four children. Yoneo died in Fairfield, Connecticut on November 18, 1980. He was 90 years old. 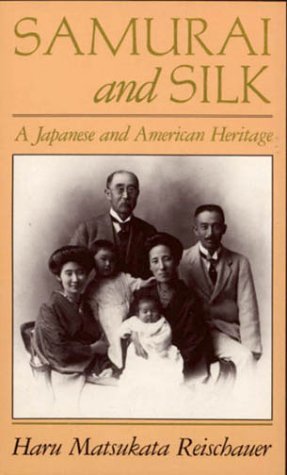 Samurai and Silk: a Japanese and American Heritage, by Haru Matsukata Reischauer, the wife of the noted Japanese historian and former U.S ambassador to Japan, Edwin O. Reischauer. She writes about her two influential grandfathers, Masayoshi Matsukata, a Meiji statesman, and Ryichir Arai, the founder of Japanese American trade.