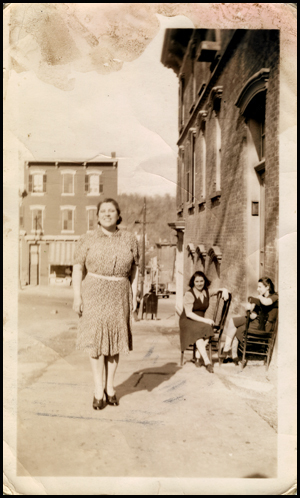 Most evenings after supper the Reher siblings would relax by sitting outside the residential entrance to their home which was at 3 Spring Street, away from the heat of the bakery ovens.  This photograph shows Mollie Reher standing near her sisters Gertie and Elsie, who are sitting on kitchen chairs. The Rehers set up their chairs here so often that neighbors joking called the area "Spring Street Beach." 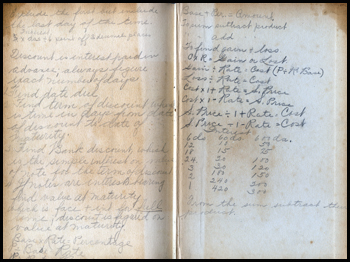 Mollie Reher was responsible for keeping the books and managing the retail bakery business. Her handwritten bookkeeping notes appear in the back of New Commercial Arithmetic, a book by John H. Moore. 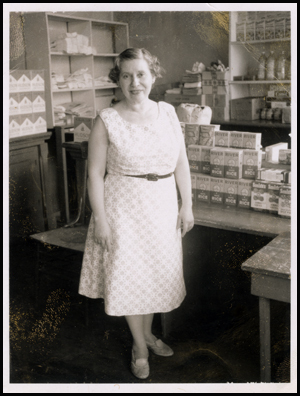 Each Reher sibling played a different role in keeping the business running: Willie handled deliveries, Hymie and Gertie baked, Mollie kept the books, and Elsie and Sadie, pictured here, helped in the shop and cooked and cleaned for the family. 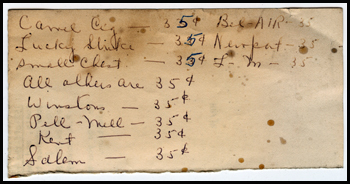 This cigarette price list was discovered in 2017, tacked to a shelf in the retail shop. 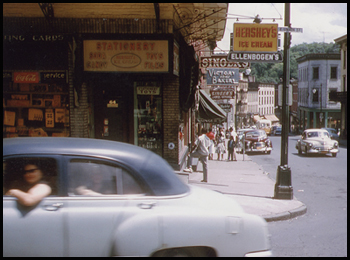 Stores and pedestrians lined both sides of the Broadway hill up until the the late 1960s, when Urban Renewal demolished the east side of Broadway. Visible in this photograph, which looks south down Broadway from East Union St., is Victory Bakery. The Rehers were famous for their breads and rolls, while neighboring bakeries, such as Speizmans, Guess’, and Victory had their own specialties, including crumb buns and German pumpernickel. 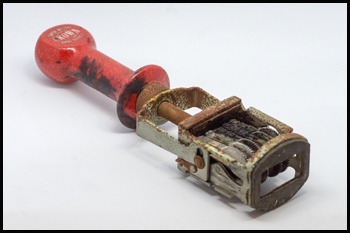 In addition to baked goods, Reher's Bakery sold household staples such as rice, lentils, sugar, and oil. Perhaps this stamper was used to price these items. 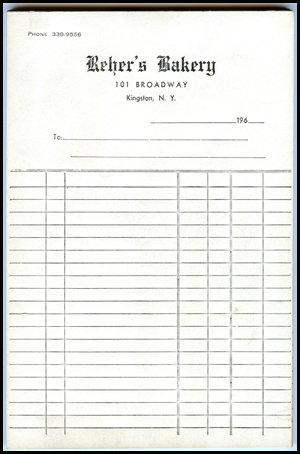 Though the Rehers invested in this attractive stationary, they never placed advertisements. Generations of new customers found the business by word of mouth or from hailing Willie’s delivery truck as it made its way through the city.