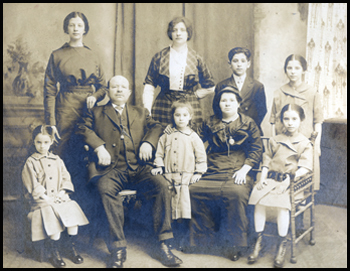 In the early 1900s, 99-101 Broadway was at the center of a densely settled multi-ethnic neighborhood where Old and New World languages and traditions lived side by side. Ade Reher, a Russian-Jewish immigrant, purchased the building in 1907. Her large family operated a kosher bakery and lived upstairs. Morris Miller, a third-floor tenant in 1915, was a Jewish ritual meat slaughterer. The Curran family lived here for at least five years, from 1920 until 1925, followed by the Italian Albertini family, in 1930.