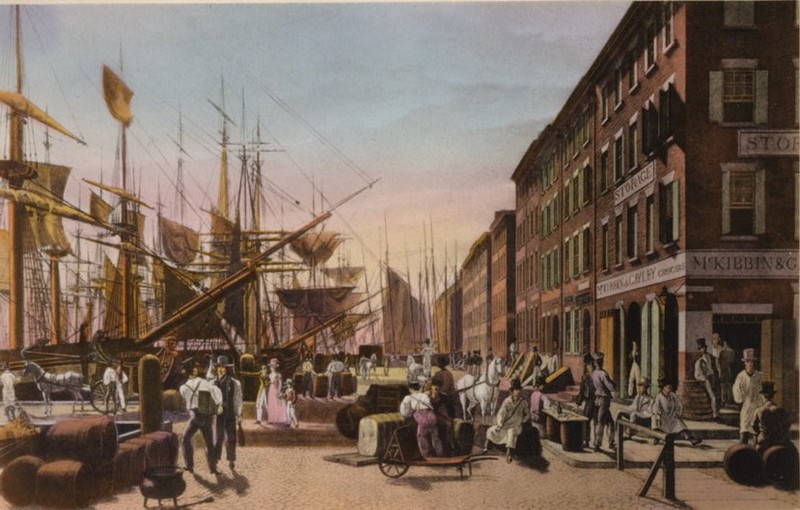 South Street Seaport as seen from Maiden Lane, 1828. Note the barrels and bales of cotton intermingled with passengers. Library of Congress.

By the early 1800s, Hudson River communities were growing. The easily navigable Hudson River made transportation easy in a region beset by mountains, streams, and creeks and without reliable roads. Access to the river and other navigable waterways influenced where people lived. Industrial factories, too, sprang up along waterfronts, for easy access to building materials, raw materials to process, and fuel. The river was at the center of everything, and nearly every part of life was touched by sailboats. 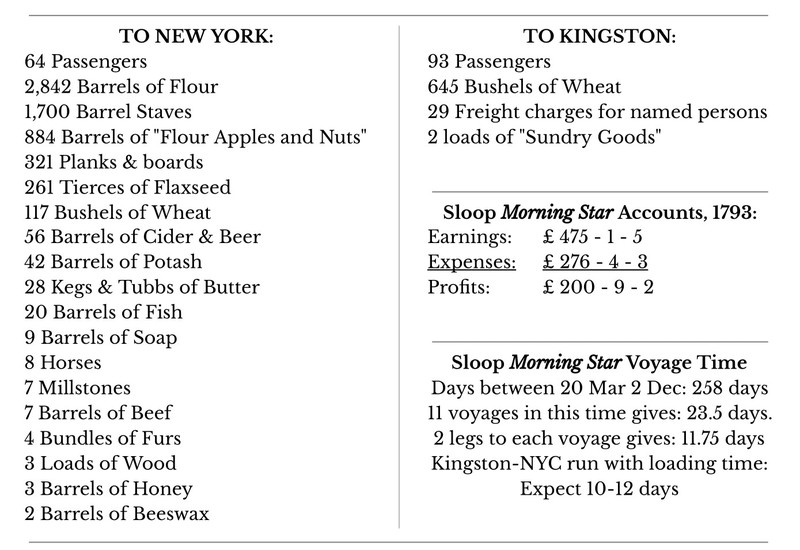 This cargo manifest is from the sloop Morning Star of Kingston, NY, for 1793. Each voyage between Kingston and New York City took approximately 10-12 days and most of the cargo was flour and barrel staves, in addition to passengers and other foodstuffs. Depicted in Sloops of the Hudson River: A Historical and Design Survey by Paul Fontenoy, 1995. 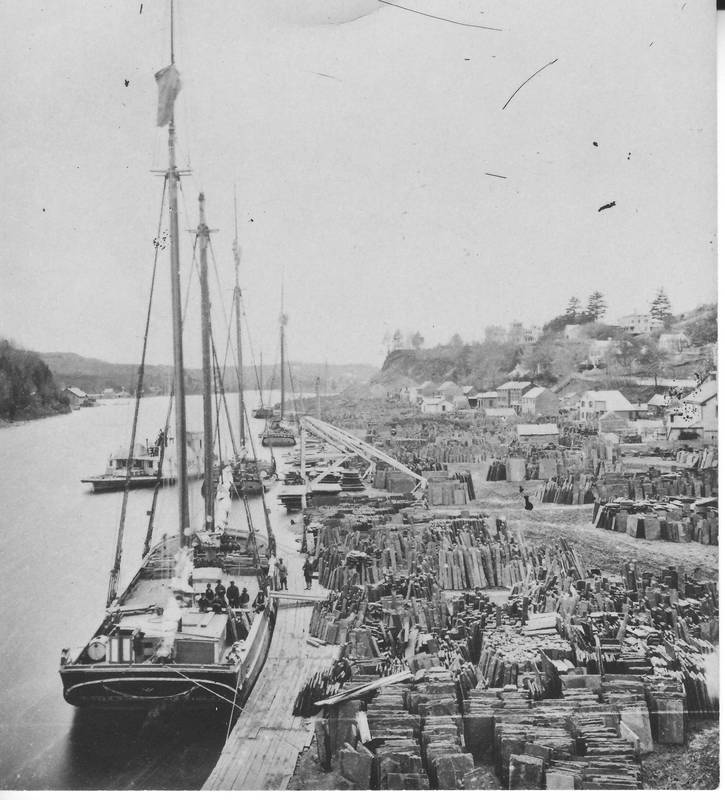 Schooners and sloops being loaded with slabs of bluestone, which line the shore at Wilbur, on the Rondout Creek, west of Kingston, NY. Hudson River Maritime Museum Collection.

Starting in the 1790s, Americans were more and more interested in canals, and by 1817, construction on the most ambitious canal to date, the Erie Canal, had begun. Essentially artificial rivers, but without hidden sandbars and rocks or dangerous waves and tides, canals represented the peak of New York’s water transportation enthusiasm. Three major canals were constructed between 1817 and 1828 - the Champlain Canal (1823), Erie Canal (1825), and Delaware & Hudson Canal (1828). All connected to the Hudson River, these three canals opened access to Lake Champlain (and Vermont timber), the Great Lakes, and Pennsylvania coal country. These three canals helped New York, especially New York City, boom. 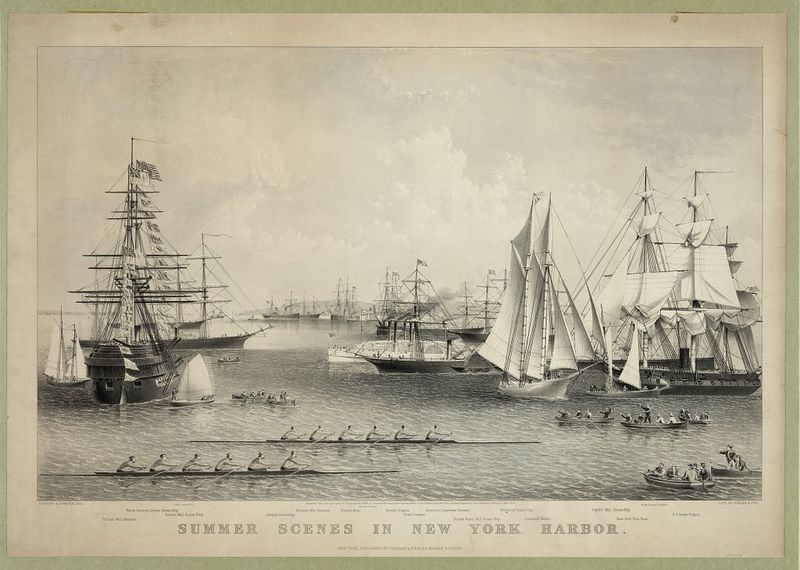 “Summer Scenes in New York Harbor” by Currier & Ives, 1869. Note that most of the vessels are square-rigged ocean-going sailing ships, with one sidewheel steamboat in the center of the image, and smaller sloops and schooners around them. In the foreground, a rowing race is cheered on by people in more ordinary rowboats. Library of Congress.

What makes a boomtown? In New York City, trade was what greased the wheels of commerce. Trade goods came in from all over the world, and New York was deeply involved in the Triangle Trade of enslaved people, sugar and molasses, and rum between the Northeast, West Africa, and the Caribbean. Sailing ships made that all possible. But trade goes both ways.

The Hudson Valley’s rich natural resources made trade with New York City and the world possible. In the 18th and early 19th centuries, New York was America’s breadbasket. Bluestone and bricks, grain and produce, natural ice and hay for horses flowed out of the Hudson Valley and tea, sugar, coffee, chocolate, china, and fabric sailed back up. 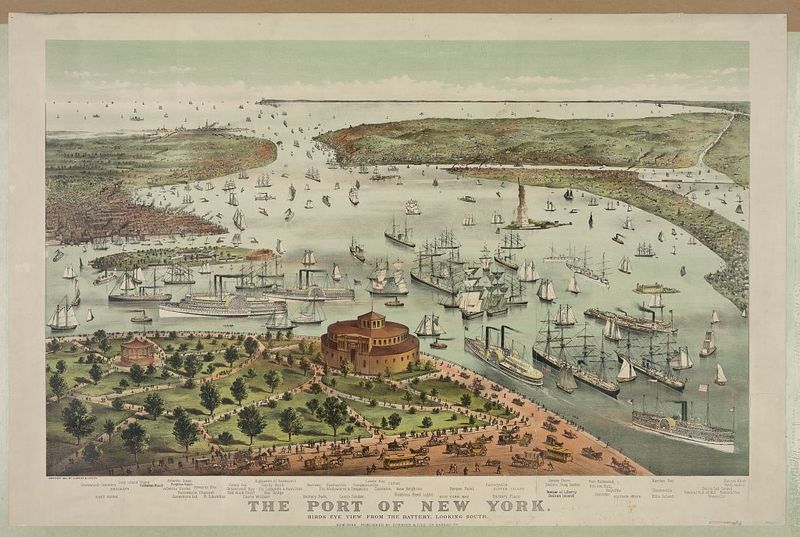 “The Port of New York - Birds Eye View From the Battery, Looking South,” by Currier & Ives, 1892. Note the park around Castle Garden, the horse trolleys and carriages coming down to the waterfront, and the numerous sailing vessels coming in and out of the harbor, with steamboats and a few tugboats. In the distance is the Atlantic Ocean, also dotted with vessels. Library of Congress.

FROM THE HUDSON TO THE WORLD

New York City was a natural end point for many Hudson River sloops, offloading cargoes for use in the city itself or for transfer to larger ships for trade overseas. Many sloops and schooners didn’t stop at New York Harbor, but sailed on, trading with coastal neighbors, or crossing the ocean. Hudson Valley bluestone ended up in communities up and down the eastern seaboard. Natural ice ended up in places like the Caribbean and India, and Hudson Valley grain and apples were sent to Europe. Sail freighters made the local economy global.