Jane was surely aware that owning land held another advantage for Black men in the family: the right to vote. Based on a New York State law passed in 1821, in order for a Black man to vote he needed to own property valued at $250 or more (this requirement had been dropped for white men). Caesar DuBois (who is thought to be Jane’s uncle) purchased land a few years ahead of Jane. His name appeared on the November 1840 voter poll list for New Paltz, indicating he may have been the first Black man to vote in town.[1]

A decade after Jane’s purchase of land, her son Jacob bought roughly half an acre for $65 (the equivalent of $2,150 in 2020) from Maria DuBois in 1851. The location of the property was north of his mother’s house, on what is now the corner of Mulberry and Church Streets. After he built his home, Jacob Wynkoop’s property was valued at $150 in 1855; just five years later, his real and personal property combined was $250.[2]

Land records from 1855 reveal that Jacob, his wife Diana, and another woman, Clarissa Tuthill, purchased the neighboring property as well. Although not as a buyer, John is mentioned in the deed; were Jacob and the others buying the land for John to ensure his eligibility to vote? Indeed, John Wynkoop is listed on the voter registration lists for New Paltz starting that very year. Jacob’s name appears on the voter list for the first time in 1858.[3]

In 1870, the land requirement for black men to vote in New York State was eliminated with the passage of the 15th Amendment to the U.S. Constitution. The amendment was an effort to provide the right to vote to all male citizens regardless of “race, color, or previous condition of servitude.” The voting rights of African American women (along with the rights of white women) would be secured in New York State in 1917 and nationwide in 1920 with the passage of the 19th Amendment. 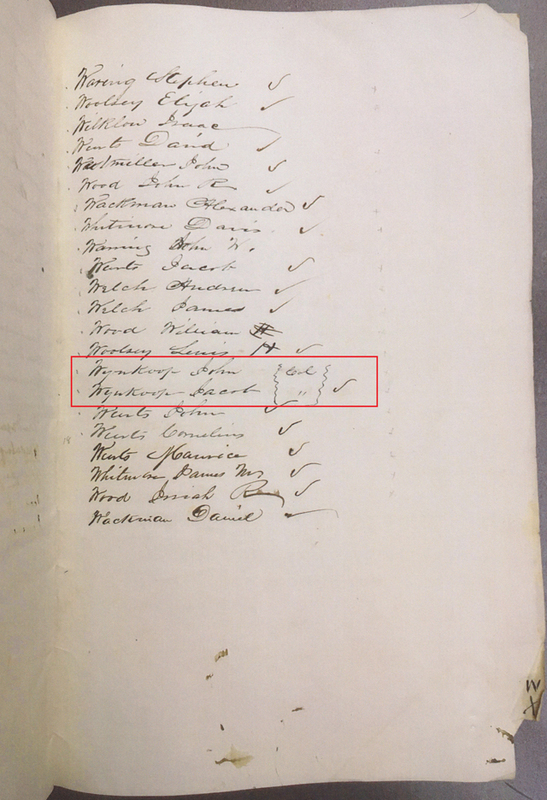