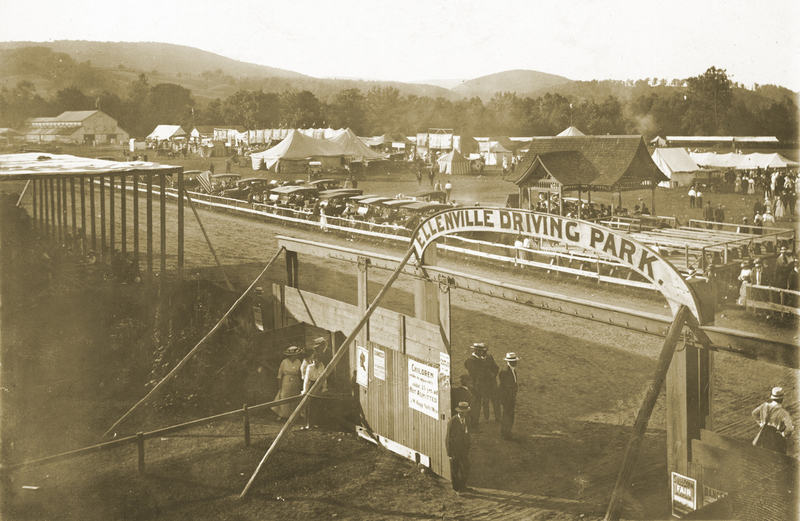 The sign on the driving park gate reads:  "CHILDREN under or apparently under 15 yrs. old NOT ADMITTED, J.W. Rapp Health Officer"

Time Magazine places the poliomyelitis epidemic of 1916 as number five in its "Top 10 Terrible Epidemics" of all time worldwide.  There were 9,000 cases in New York City and it was the cause for widespread panic among parents, since as its nickname "infantile paralysis" implies, most deaths occurred to those under age five.  25% of those infected with the disease died as a result that year.  Children were barred from congregating in any common area such as swimming pools, amusement parks and movie theaters.

The Ulster County Fair was no exception.  In 1916, children under 15 were refused admittance to the fair.  According to The Kingston Daily Freeman (August 11, 1916) there were eight cases of polio reported in the Town of Wawarsing outside Ellenville and one case inside the corporate limits of the Village of Ellenville, by that date.  The village case (a native child) was under quarantine, while the town cases were sent back to their permanent residences in New York City. 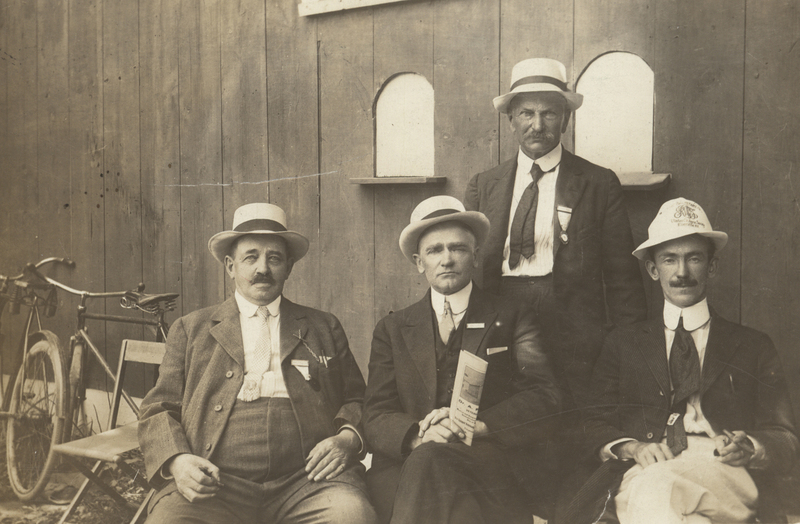 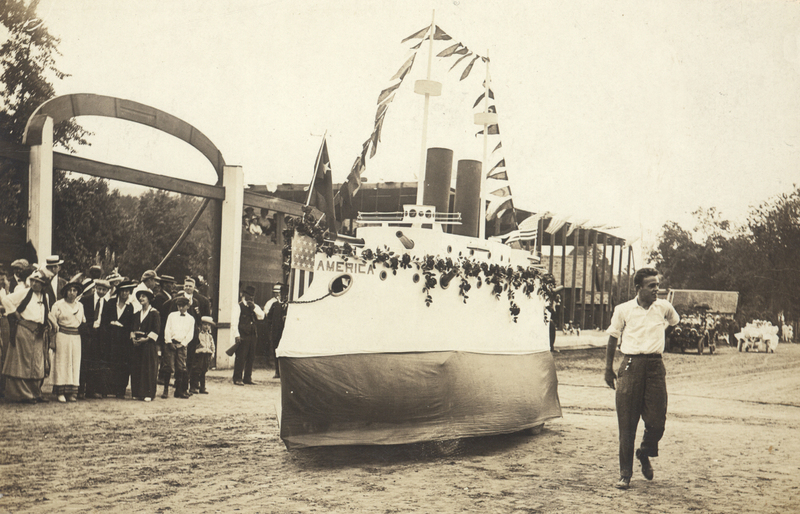 This float, the ship "America," was entered by M. E. Green of Kerhonkson, and was driven by his son Edwin, seen leaving the float to collect his first prize. 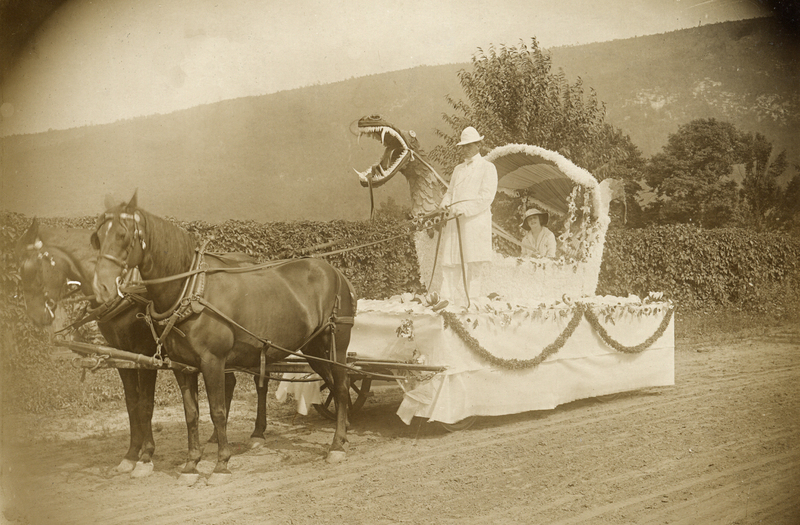 "'The Dragon' float, entered by Anita Deyo, represented a huge dragon with green head and tail, the dragon resting on a platform of white, covered with daisies.  Seated within the body of the dragon was Miss Ruth Abel, whose costume corresponded with the general color tone and decorative scheme of the float.  This float in artistic effect and detail of workmanship was one of the finest floats that has been shown in any Floral Parade in years and the judges in addition to the special prize ribbon awarded to each float awarded 'The Dragon' the special prize offered for the best horse-drawn vehicle in line, the prize consisting of a cut-glass set of pitcher and six tumblers with silver-mounted French plate mirror base." (The Kingston Daily Freeman, August 17, 1916) 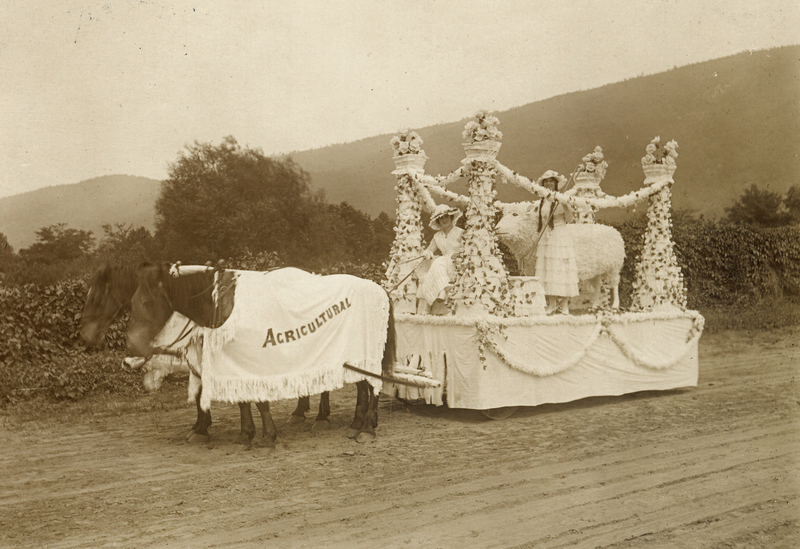 "The Ulster County Agricultural society float represented a rural scene -- a large, white-fleeced sheep, attended by Miss Dorothy Vernon as shepherdess.  Four columns at either corner of the float were surmounted by huge pots of pink roses, and connected with floral chains of white and pink roses.  The float was driven by Miss Ella DeVany."  (The Kingston Daily Freeman, August 17, 1916) 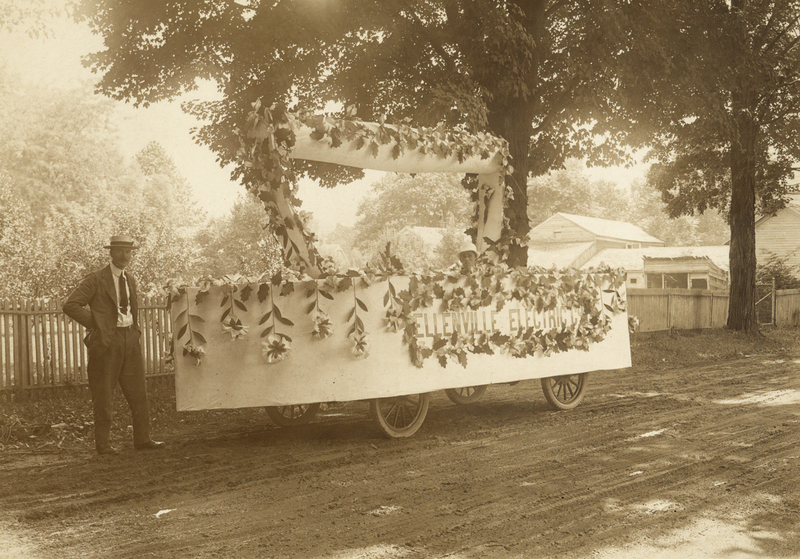 "The first prize for the business float was awarded to the Ellenville Electric Light Company, whose representation was a huge electric smoothing-iron of white and gold."  (The Kingston Daily Freeman, August 17, 1916) 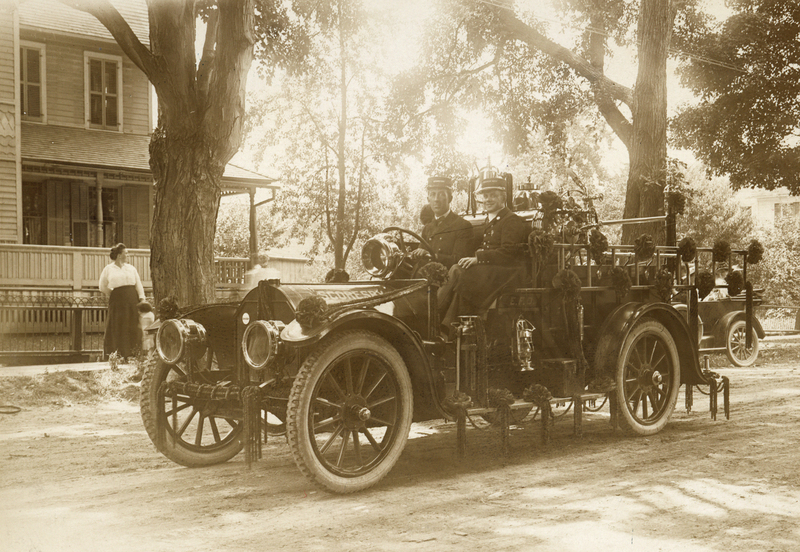 "Scoresby Hose Company's modern up to date fire truck won first prize for the best decorated firemen's apparatus.  The decorations were of red roses.  After receiving the prize, the wagon returned to the hose house to be ready in case it should be called out."  (The Kingston Daily Freeman, August 17, 1916) 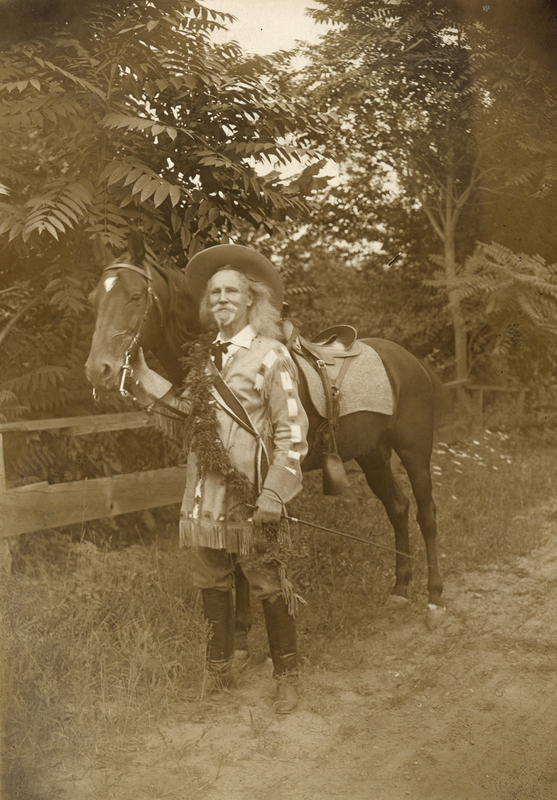 "Captain Jack Crawford, who shares honors with Buffalo Bill as an Indian fighter, led the parade.  The captain is spending the summer at Yama Farms Inn and long experience on the plains requires that he continue horseback riding in order to keep his health.  He is a picturesque figure, with long hair which streams behind him in a way that ought to create envy in the heart of any Indian whose ancestors looked longingly at the white man's scalplock. The captain wore his plains suit of buckskin, trimmed with leather fringe, and the ovation he received from the crowd was fully warranted by his reputation and appearance."  (The Kingston Daily Freeman, August 17, 1916)