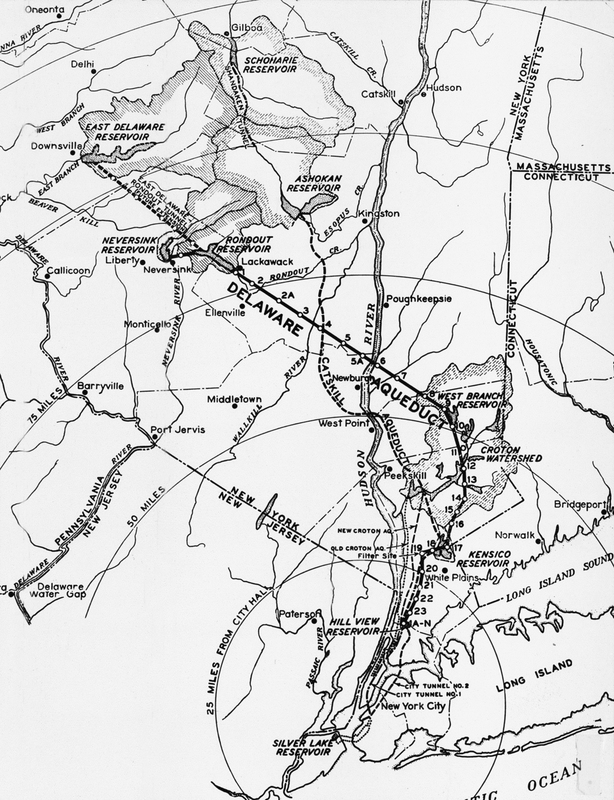 The Delaware Aqueduct stretches over 85 miles between the Rondout Reservoir and Yonkers, where it was connected to an existing water supply system. It is the longest tunnel in the world! The first water diversion for New York City was the Croton Aqueduct constructed between 1837 and 1842. The Croton Reservoir stood at 40-42nd Streets at site of the current New York Public Library. Today the Croton System delivers only10% of NYC water; the Catskill System 40%; and, the Delaware System 50%.

The Rondout Reservoir is eight miles long, 180 feet deep and contains over fifty billion gallons of water. It contains water from the Rondout Creek and also brings water from the East Delaware and Neversink Reservoirs, located to the northwest. The reservoir supplys over one billion gallons of pure water to New York City daily. Thaddeus Merriman, Chief Engineer of the Board of Water Supply in 1928, drew up the original plans for the dam. When he died in 1939, the Board named the dam after him. 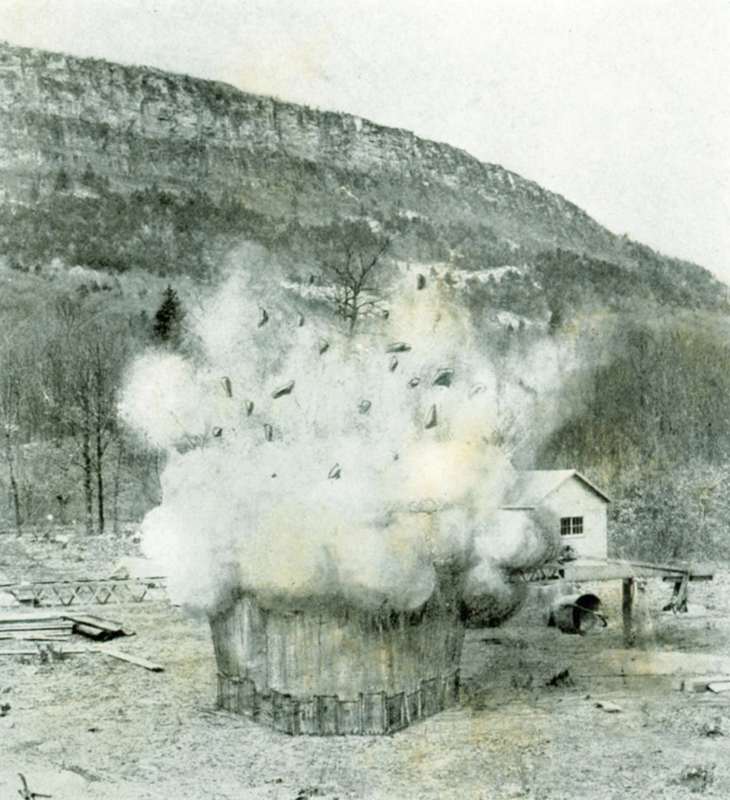 The first step in the project was the creation of a 2600-foot diversion tunnel which would allow the Rondout Creek to flow around the construction area until the reservoir was ready to be filled. The original reservoir completion date was 1945, but when lack of materials and manpower interupted construction during World War II, completion was postponed until 1952. Prior to the U.S. entering the war, engineers were warned of a potential threat to our water supply and anti-sabotage regulations were strictly enforced, keeping use permits of the watershed area to a mimimum.

The main Delaware Aqueduct tunnel construction began with a fanfare of opening ceremonies held in Gardiner, New York, on March 24, 1937. This artist's rendering of the dynamite blast at Shaft 3 appeared in the festivities program brochure.  The event was attended by hundreds of dignitaries from New York and Albany. New York City Mayor Fiorello LaGuardia pushed the switch which set off the initial excavation blast. 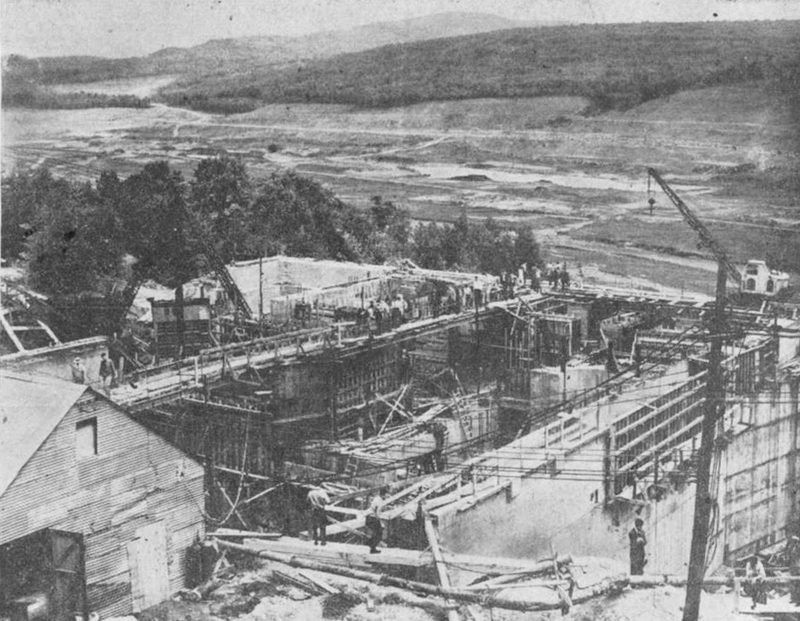 This is an exterior view of the dam construction at Lackawack. Notice the valley in the background, stripped of its structures, awaiting the influx of water to fill the reservoir. 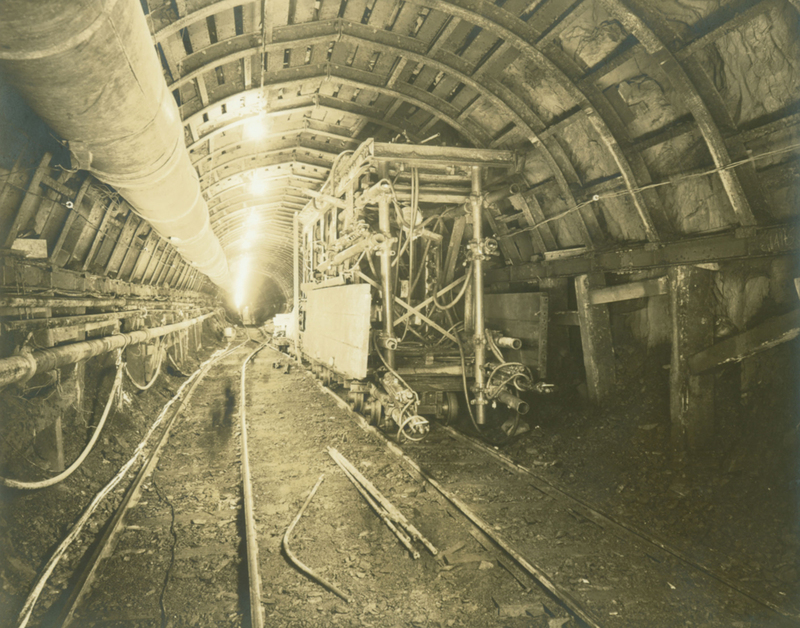 This photo shows the interior of the tunnel during construction. Sections of the tunnel were built between 25 vertical shafts which provided access for equipment, manpower and removal of earth and stone. The tunnel runs at a depth ranging from 600 to 2400 feet below ground surface. 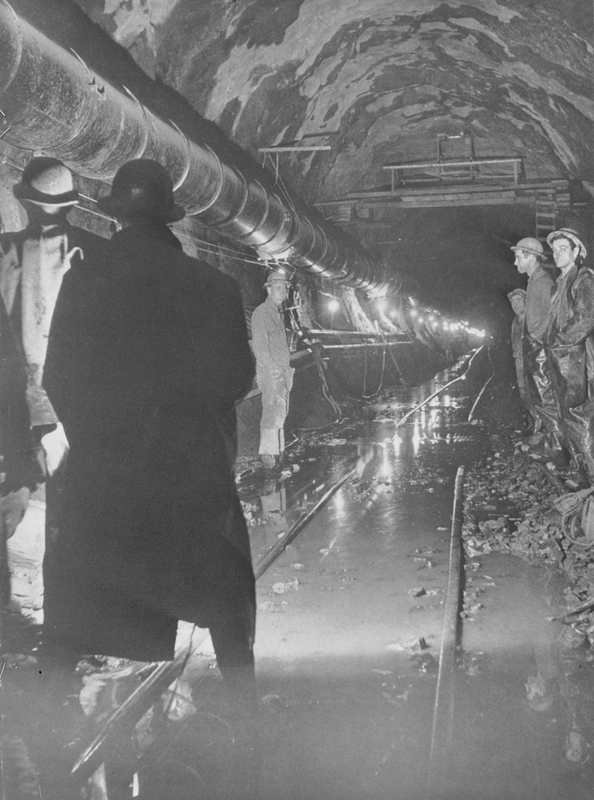 Hundreds of men worked in hazardous conditions, subject to explosions of natural gas and falling rock. Fifty-eight men were killed during construction of the tunnel, less than the number predicted of 85 (one per mile). 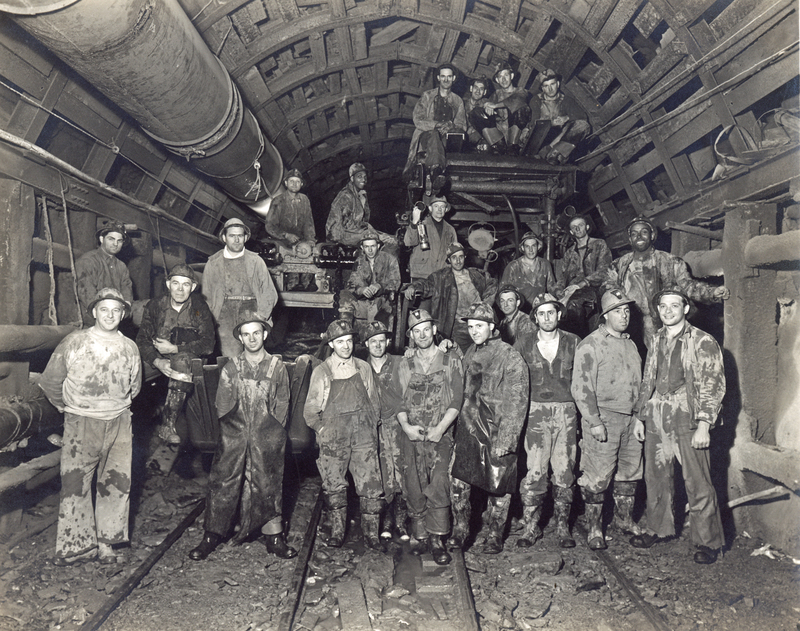 Above is an aerial view, looking northeast, showing the dam site with buildings removed prior to the removal of trees, shrubs and pavement; dam construction has begun. The second photo shows the filled reservoir looking northwest from the Merriman Dam at Lackawack toward former Montela and Eureka. 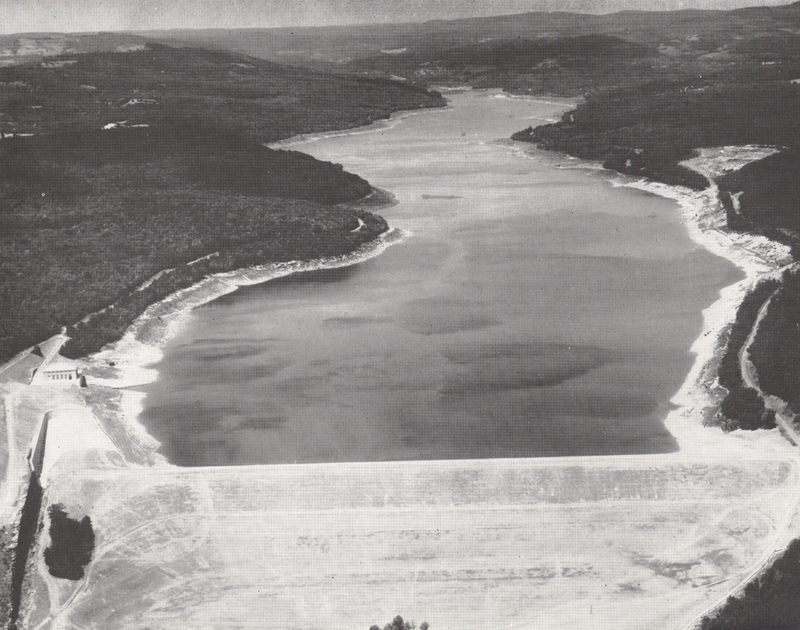 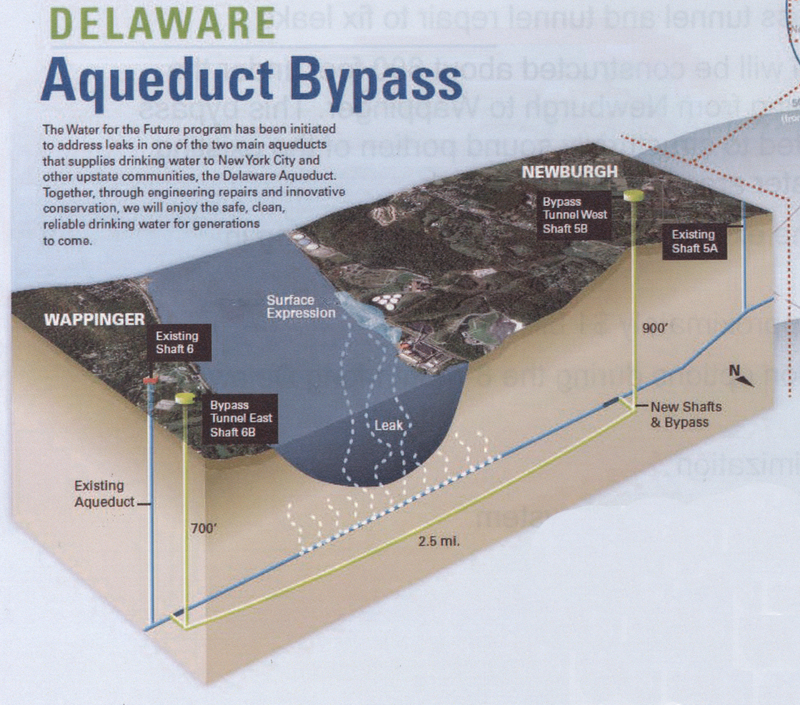 In 2000, it was discovered that the adqueduct was leaking, the most severe area being beneath the Hudson River between Newburgh and Wappingers Falls. Other leaking is taking place in Wawarsing. A submarine was released into the tunnel to photograph the leaks. Estimates state that between 33 and 100 million gallons per day are lost through the leaks.

This diagram shows a cut-away view of the bypass tunnel work which is ongoing at the Newburgh location. The Delaware Aqueduct will be shut down for about  8 months in order to connect the bypass to the main tunnel, scheduled to take place in 2022. Repairs at Wawarsing will take place within the existing tunnel.

← The Sheils Family of Lackawack
Remembering →
Dam and Tunnel Construction