Hendrick Aupaumut’s letter to the New York Legislature, a fantastically rich and meaningful document to readers today, is not an anomaly or exceptional in terms of its content. Rather it can be seen as part of a series of letters, petitions and other documents that represent the ways in which the Mohican nation utilized writing as a tool for land protection. The Mohican nation had been displaced from their central town of Pempotowwuthut (Place of the Council Fire, Albany) on the Muhhekunnutuk (Waters that are Never Still, or the Hudson River) in the early seventeenth century, and again, from their town of Stockbridge, on the Housatonic River, in Massachusetts after the Revolutionary War. During the time that this letter was written, the Mohicans faced yet another series of dispossessions, by New York settlers, the government of the state of New York and land companies that sought fertile lands in Haudenosaunee (Iroquois) territory. 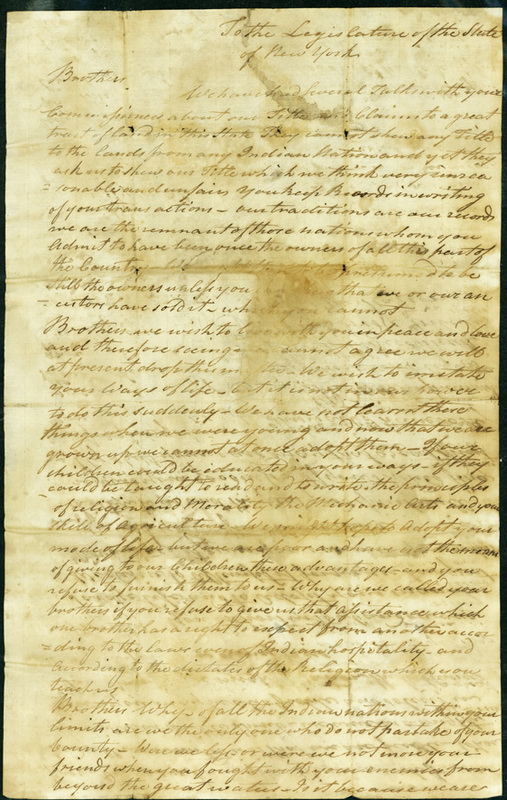 At the time, the majority of Mohicans were living in a place they called New Stockbridge, on land given to them by the Oneida nation, one of the six nations of the Haudenosaunee Confederacy. This was their new town and the place they had believed they would remain. However, both the Oneida nation and the New Stockbridge community were under severe pressures to lease their lands to settlers, to relinquish land to the United States and state of New York, and to migrate west. Many Haudenosaunee people resisted removal. Mohicans ultimately decided that migration would be favorable to dispossession, and negotiated with the Miamis for land in Indiana which were subsequently lost, and, later, with the Menominee nation for lands in Wisconsin, where they remain today. It is important to note that movement and migration has always been a Mohican strategy and is embedded in their traditional creation story, which says that they originally came from moving waters to the west, probably in the region of the Great Lakes, to which they returned during this time. This letter is written during this tumultuous period in Mohican history. It was likely written after Aupaumut’s diplomatic journeys to the Ohio River Valley (1791-93) and before their removal to Menominee territory (1817-1830).

Hendrick Aupaumut was a fierce advocate for Indigenous title and land protection. In this letter, he makes clear that by their own traditions, including oral narratives and wampum, the Mohicans hold the land and their aboriginal title to their homelands. Moreover, he shows awareness of U.S. Indian law in stating that unless the state of New York could show evidence that they had fairly purchased “title” to the Mohican, their aboriginal title remained. He insisted that the Mohicans should not have to demonstrate their title to the state of New York, but rather the burden of proof was on the colonizers. The language of brotherhood is also very important in this letter. This is diplomatic language which evokes the long relationship of alliance between the New York colony and the Mohicans, as well as their relationship to the new (younger brother) nation of the United States. Aupaumut led a Mohican company during the American Revolution and Mohican leaders never failed to remind Americans of their obligations as “brothers,” equals who needed to respect each other’s rights and engage in reciprocal relations. 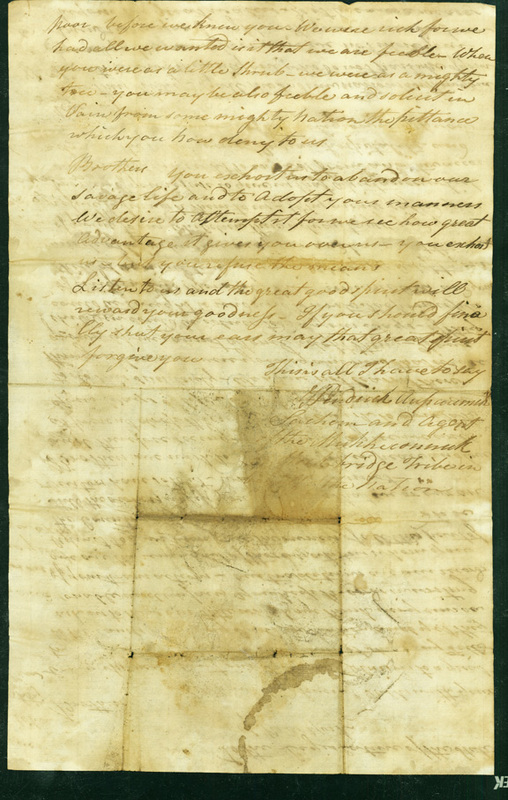 Aupaumut also refers in this letter to the United States’ civilization program, whereby settlers sought to “convert” Native men to colonial agriculture, including the use of plows and animal husbandry. This was a major reversal from traditional Mohican and Haudenosaunee agriculture, in which Native women planted communal fields, using hoes and companion planting of corn, beans, squash and other highly nutrient plants. Nearly every treaty during this period included agricultural instruments, which were supposed to make Native people more “settled” and require less territory than traditional subsistence, which combined planting with hunting, fishing and gathering. Moreover, these treaties were often designed to give white male settlers access and title to fertile fields which had been previously planted and held by Haudenosaunee and Mohican women. It is no coincidence that many Mohican and Haudenosaunee women resisted and opposed the leasing and relinquishment of land and the implementation of colonial-style agriculture. Aupaumut also speaks to the adoption of reading and writing, which he had learned at Stockbridge as a child, which the United States offered to extend to Native children, but did not always provide. Some communities rejected this offer because it was tied to other, less advantageous, settler practices, including churches and missionaries. Others viewed writing as a crucial tool to resist dispossession by deeds and false treaties. This letter is but one example of the ways in which Native leaders, like Aupaumut, used writing as a tool of communication, diplomacy and resistance.

Aupaumut ends the letter with a powerful message for the New York legislators to clear and keep open their “ears.” He uses the traditional language of diplomacy and invokes the condolence ceremony which was held before every council. He suggests not only that they may not be able to hear clearly his nation’s words, but they might be turning away from their brothers and ignoring their responsibilities. He also invokes a longstanding trope in Mohican diplomacy, in recalling the ways in which his ancestors helped the settlers when they were weak and small. Now that the settlements had grown, the Mohicans expected reciprocity, for the settlers to aid and respect their “Brothers,” who had always given them aid.