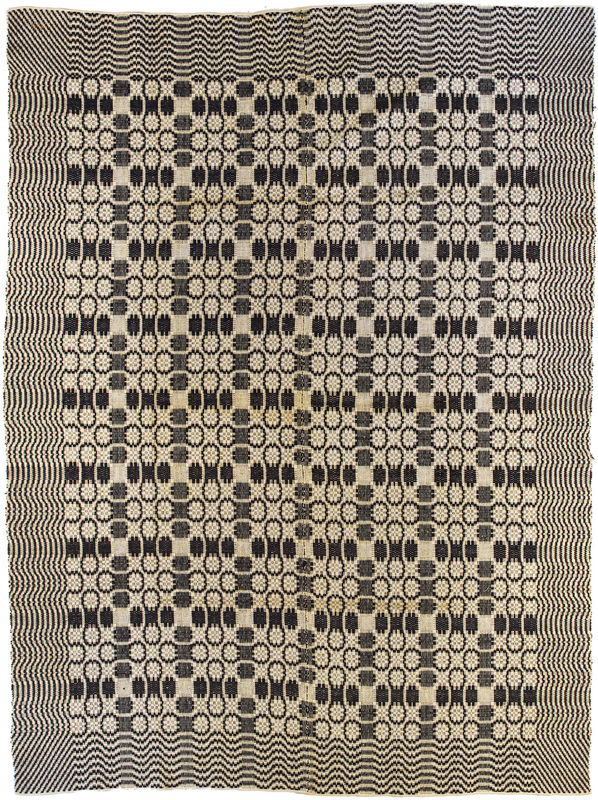 Float work uses two weave structures: plain weave as a ground, and twill weave that creates the pattern block "floats”–the yarns that form the geometric designs by overshooting or passing over the plain weave ground. The warp (vertical) is usually cotton or very occasionally, linen. There are two separate fillings or wefts (horizontal).  One filling creates the pattern; it is the thicker yarn float (generally dyed wool). The second filling is of thinner yarn (generally cotton) that binds the pattern float in place.

The look of a float work coverlet is diffused and tonal. The surface is often textured and dimensional. Patterns are always geometric.

“Float work” was the name used by weavers in the eighteenth and nineteenth centuries. The term “overshot” is more commonly used today, introduced by Colonial Revival historians. Many of the earliest surviving American coverlets are float work. 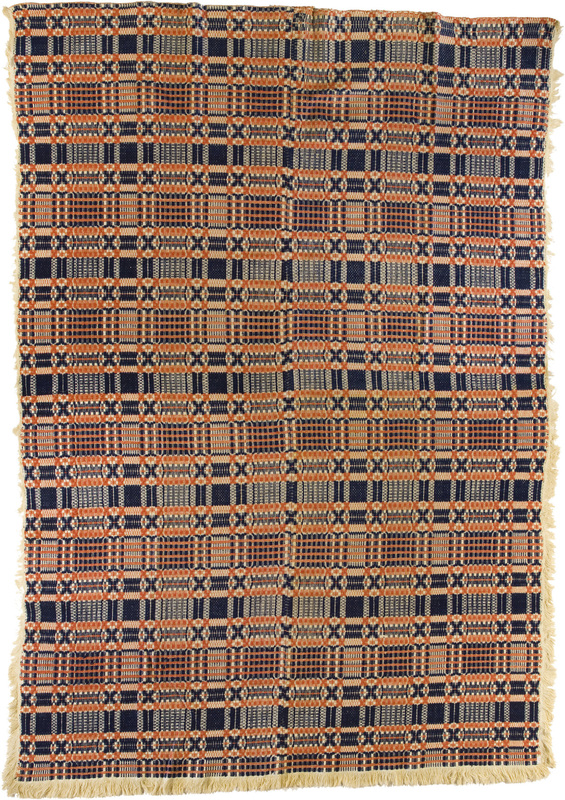 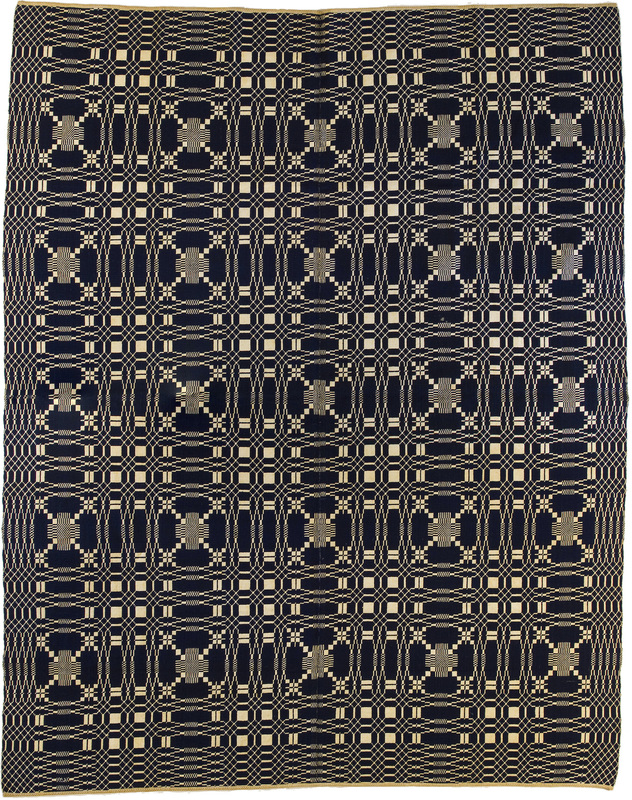 A shuttle carrying the cotton and a shuttle carrying the wool are thrown across the warp alternately in their own sheds (the shed is the vertical space between the raised and un-raised warp threads that the shuttle passes through) so that the two layers of cloth do not intersect except when the pattern blocks change. A pattern is made by threading the two warps alternately on sets of four shafts. Most of the double cloth coverlets in this exhibition have four or five pattern blocks to create geometric designs, meaning that a loom carrying at least 16 or 20 shafts was necessary to create these patterns. 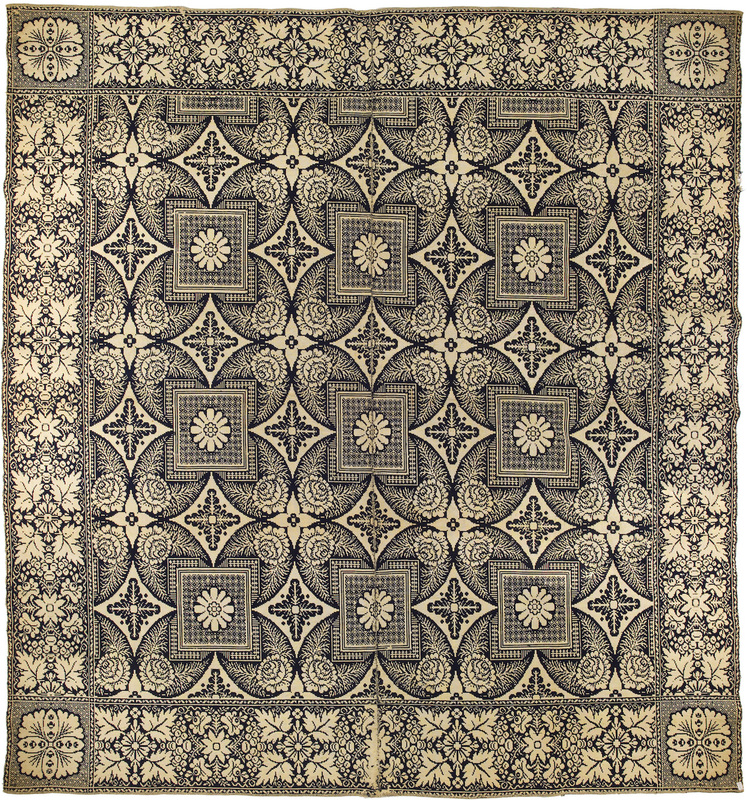 There were two types of coverlets woven using plain double cloth: geometric and figured. Both were produced by trained “fancy” weavers, many of whom trained as carpet weavers. The geometric ingrain or “Scotch carpeting” that these weavers produced starting in the late 18th-century used the same double cloth weave structure.

Weft-faced plain weave is a version of “over and under” that switches to the opposite combination when the shuttle is passed in one direction, left to right and then right to left.  In weft-faced plain weave the filling or weft yarns are the only yarns that are visible in the coverlet. The warp or lengthwise yarns are covered completely by the crosswise yarns. 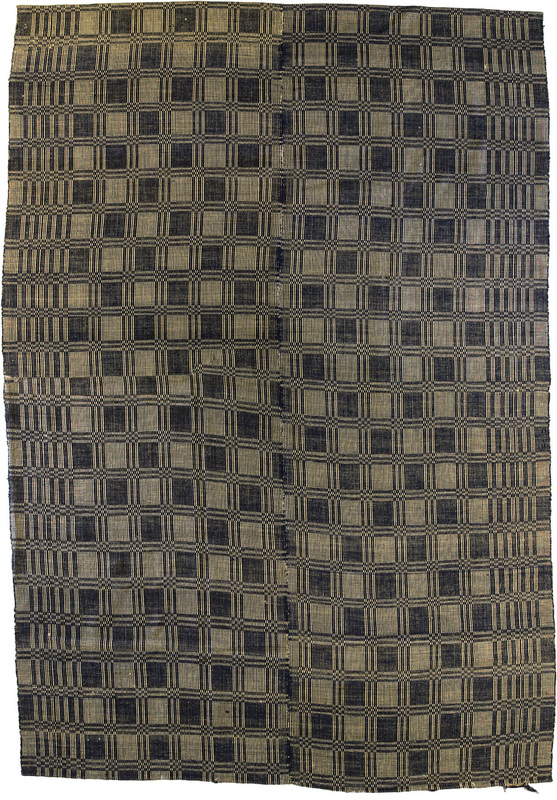 The look of a weft-faced plain weave coverlet is somewhat ribbed or corded. Patterns are always geometric.

Weft-faced plain weave coverlets are considered the rarest surviving coverlets–possibly because they were not as durable as other types of coverlets–and are often dated to the eighteenth century. They were extremely labor and material intensive to make. The form went out of fashion as other weave structures and types of coverlets gained popularity.