Despite the apparent esteem of many in the New Paltz community, Jacob was not immune to racist practices that existed at all levels of government at the time. In September 1893, the Independent reported that Jacob, “a very respectable colored man, residing in this village and member of the Eltinge Post [of the G.A.R.], has had his pension [of $12.50 a month] suspended … The New Paltz Times [led by Charles Ackert] very properly voices the feeling of indignation among our citizens at this action of the pension department.”  The paper made particular note that the decision was made by the U.S. Department of the Interior under Hoke Smith, who would prove to be a strong proponent of black disenfranchisement and who, while governor of Georgia, enacted several laws severely limiting the black vote. Jacob’s battle for his pension, documented in the National Archives, went on for some years. Ann Oliver, widow of Richard (who did not survive the war), had a similarly difficult time. At one point, Jacob’s case required an affidavit, signed on June 17, 1893, by Charles Ackert and Elting C. Crispell, stating that it was not dissolute behavior that prevented him from working, but rather his age.  Eventually, Jacob’s pension was reinstated.[1] 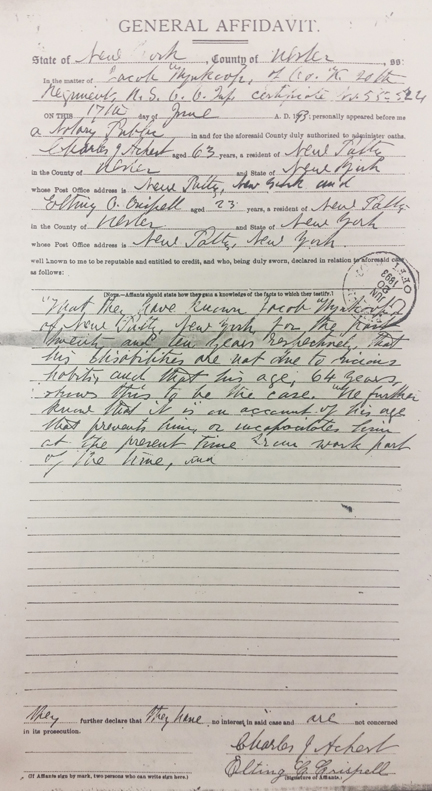 By this time, Jacob was a widower: according to the local paper, Diana died in October 1888 after a long illness. Her funeral service was conducted by Reverend R. A. Brown at the A.M.E. Zion Church, and she was remembered as a “kind-hearted woman” whose example of “purity and love” should be followed by all. Diana lived long enough to see her daughter, Jennie, marry Isom Walker and become the mother of Charles, George, and Emma.  For a time, Jennie and her family lived with Jacob and Diana. Sadly, Jennie died a month after Diana. She would have been only about thirty-five years of age.[2]

The family was to face many more losses in the years ahead. Grandson George died young at age 21 in 1896. The New Paltz Times wrote that he’d been in feeble health for a year. The service was conducted by George’s paternal grandfather, the Reverend A.M. Walker. Reverend Charles Moody made the closing prayer. The paper noted that “every room of the house was densely crowded with relatives, neighbors and friends.”  Jacob’s granddaughter Emma married Charles Franklin and had several children. Unfortunately, at least five of them died as infants or toddlers, and two others died at age eleven and twelve.[3]

Detail from the Cyrus Freer's “Death Book” showing obituaries for "Aunt Jennie mother of Jacob and John Wynkoop," "Dian Wynkoop" and "Jennie Walker." Cyrus Freer, a white man, was friends with the Wynkoops. He kept several journals in which he recorded information about New Paltz history, including his “Death Book,” where he compiled obituaries for people in the community. Haviland-Heidgerd Historical Collection, Elting Memorial Library.Â 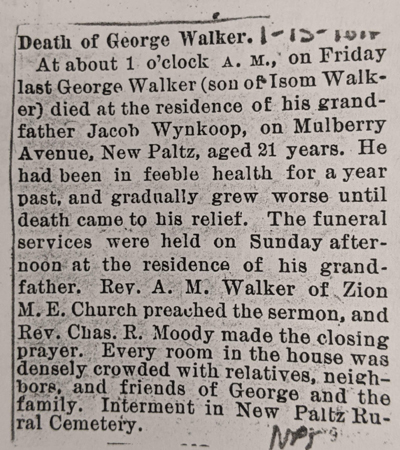 Turn of the Century

In 1900, the overall black population of New Paltz had fallen to fifty-nine, little more than half of what it had been in 1880, with eleven African Americans living in the County Poor House. Six of the African-American families in town were living in the Mulberry-Church-Broadhead neighborhood that the Wynkoop family had done so much to create. Jacob was listed as the 70-year-old head of a household that included his brother John, as well as Bette and Maggie Rose, likely the sister and sister-in-law of his late wife Diana. Jacob’s granddaughter Emma and her husband Charles, a farm laborer, lived nearby.[4]

1900 United States Census showing the Wynkoops and Walkers, as well as Maggie Freer and son and black households headed by Jacob LeFevre and Debbie Dewitt in the Mulberry-Church-Broadhead area. Courtesy of the National Archives and Records Administration. Full document published by Ancestry.com.

Jacob’s occupation was downgraded in the 1900 census to "farm laborer," a change in occupation he attributed to the failing eyesight he mentioned in a pension statement. Despite the setbacks of old age and economic hardship, Jacob continued to be recognized in the community as color bearer and chaplain for the G.A.R, for which he led prayers at Memorial Day gatherings and other events. It’s believed he may also have been nominated to run for Town Collector on the Republican ticket (although unsuccessfully). Around this time, the New Paltz Independent also wrote appreciatively of the walkway Jacob created from where the flagstones ended farther south on Church Street to his residence, saying “this will prove a convenience to those of our people who wish to take a walk out to see the Patentee Pond [later the site of the first Moriello Pool, now filled in].” [5] 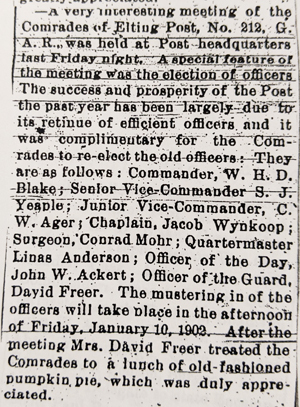 As mentioned earlier, Cyrus Freer kept voluminous journals describing various goings-on in the Village of New Paltz–sometimes mentioning one or the other of the Wynkoop brothers–and recording points of historical interest. One such volume he entitled “All About … .” The large, bound manuscript talks about the history of ownership and what was known of the construction of most of the buildings in the village at the time. To help him in his ambitious endeavor, Cyrus relied on others in the community to fill in details. Jacob, one of the handful of contributors, is cited many times, not just concerning the houses that he himself worked on but also many buildings throughout the village. Notably, Jacob was one of a small group of people who remembered firsthand the specific location and the architectural details mentioned earlier of the 1773 stone church on Huguenot Street. (That church was torn down and replaced by a new, substantially larger, brick Reformed Church built in 1839.)[6] 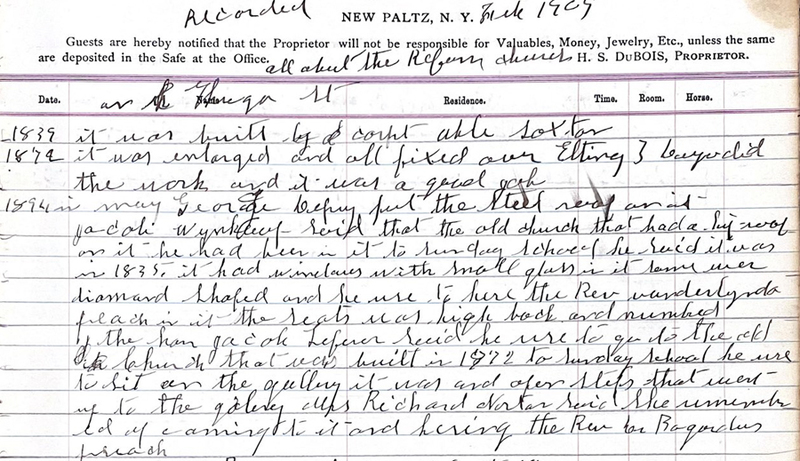 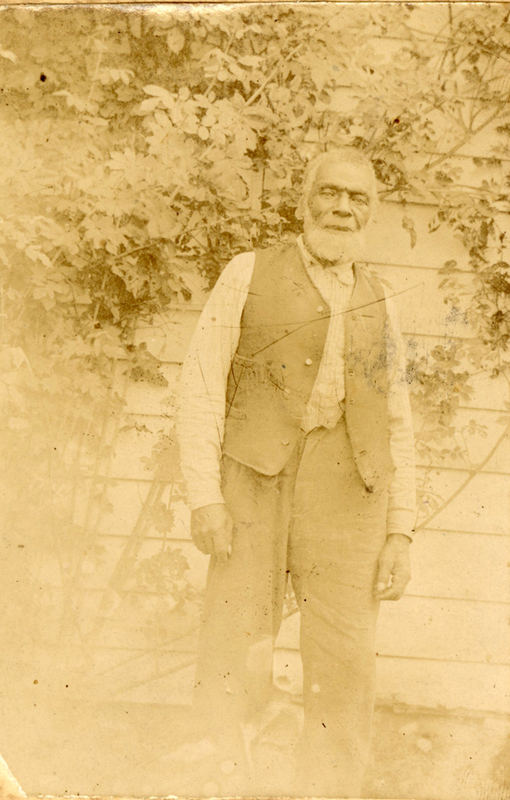 Cyrus also kept a book of obituaries he wrote himself for people in the community. When John Wynkoop died in 1907, Cyrus wrote that the funeral was held at the A.M.E. Zion church and was so well attended that some were forced to stand. Cyrus described John as “respected by all that knew him[.] by his death the church looses a good man[.] the town looses a grate good citizen[.] he will be missed [.]” Read more about John by clicking here.[7]

Indeed, the community, especially the black community, was suffering losses and changing. The neighborhood that had once included several other black families had none besides the Wynkoops in 1905. Two years later, the editor of the New Paltz Independent noted that the black population had decreased substantially in the previous twenty-five years and stated that the number of registered black voters was probably not more than half of what it had been when the colored Republican group, with Jacob as captain, was organized.[8]

The year before John died, his house was sold to local real estate investor, Jesse Elting, a white man. Four years later the 1910 census reveals that Jacob’s granddaughter Emma, now a widow, was renting the house and living there with four of her children. Jacob still lived in his house next door, alone.[9]

Jacob Wynkoop passed away on August 25, 1912. In his will, he left his remaining assets to Emma and his grandson Charles Walker, then living in Newburgh. The obituary from the New Paltz Independent, which had covered so many details of Jacob’s life–often in glowing terms–has not been found. Jacob’s obituary in the  Kingston Freeman  noted his service during the war and mentioned his role as chaplain in the G.A.R. Cyrus Freer reminisced in his “Death Book” that he and Jacob had been great friends and that Jacob had been not only a good carpenter but also a well-read man and a good citizen, a man who remained “very useful” into his eighties. Details about Jacob’s last years are few, but his legacy is apparent in the numerous clippings and public records that mention his activities and the houses he built that remain today in the village of New Paltz. Jacob was buried at the New Paltz Rural Cemetery in an area devoted to G.A.R. members and Civil War veterans. Each Memorial Day, an American flag is placed at his grave in recognition of his war-time service.[10] 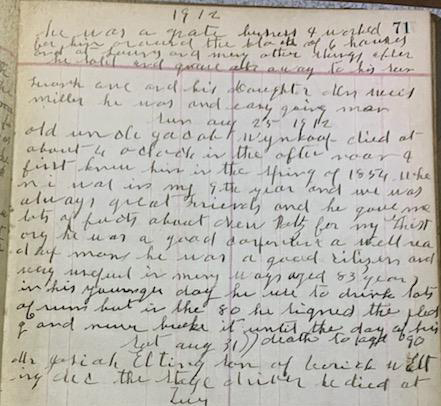