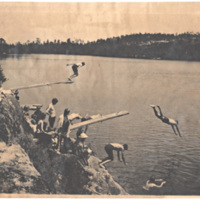 Camp Awosting was founded in 1900 by Dr. Walter Truslow, member of the Kings County Medical Society of Brooklyn, New York, and Blake Hillyer, president of the executive committee of the Physical Education Society of New York. The camp for boys was originally established in what is now Minnewaska State Park.Through the photographs and memorabilia compiled by William Faber Davis Jr., we are given a glimpse into the early 20th century life of male adolescents' coming of age in the mountains of Ulster County, New York.

The Life and Death of Leah Catharine Deyo Jessup 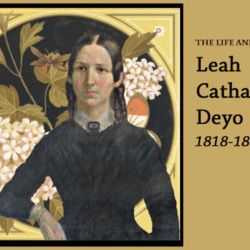 Leah Catharine Deyo was born in New Paltz, NY in 1818 and resided in the Hudson Valley until her death in 1849. John and Katia Jacobs, descendants of Leah Catharine preserved a collection of her correspondence, daguerreotypes, clothing and photographs. They generously donated it to the Haviland-Heidgerd Historical Collection at the Elting Library in the 1980s. This exhibit chronicles different aspects of Leah Catharine's life and offers a glimpse into the daily life of a mid-nineteenth century woman.