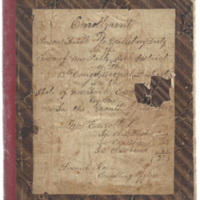 From June 9th to June 29th 1863, an Enrolling Officer named Daniel Rose compiled a list of men from New Paltz who were eligible to be drafted in the first United States Military draft during wartime. The list also includes New Paltz residents who were already in the Army with their respective regiments. On the 3rd of March 1863, the U.S Congress passed The Enrollment Act. All healthy male citizens between the ages of twenty and forty-five were subject to military duty. This included any foreign immigrants who “declared on oath their intention to become citizens.” A total of 354 men were enrolled in this book.

This Exhibit includes the entire 1863 New Paltz Enrollment Book and its transcription, a consideration of conscription laws, an examination of particular New Paltz regiments, a partial list of Civil War veterans buried at the New Paltz Rural Cemetery, and a look through the eyes of individuals who experienced the war.

As students of history, we rarely have the opportunity to form a personal connection to a time period and to fully immerse ourselves in that experience. Creating this exhibit has enabled us to study a small piece of Civil War history at a local level. Through this examination we were able to connect specific individuals from New Paltz to the War’s national impact.

The following are the last words written by New Paltz's Captain Johannes LeFevre after being mortally wounded at the Battle of Cedar Creek:

My Dear Mother: I know that you have been suffering more in mind for the last week than I have been suffering in body. So I will be writing to give you my present condition. You are anxious to have me home so that you can see just how bad I am & that you could take care of me. Those who were but slightly wounded & could get off of the field themselves got a good way the start to me in getting home They were half way home before I got to the Hospital. However I do not think my wounds are much of any worse because I lay all night They dress wounds with cold water only mine are running & look exceedingly well Nov 1st Wounds still easy & running well I am week & helpless, but think I will gain again shortly...

This online exhibit was created through a partnership between the Town of New Paltz Historian’s Office and the State University at New Paltz History Department. Interns: Sean McGill, Scout Mercer, Christina Lorper and Kieran Coughlan were instrumental in all aspects of the exhibit.

This project was made possible by the support of the following organizations and individuals: