← Following the Death of an Enslaver
Wills → 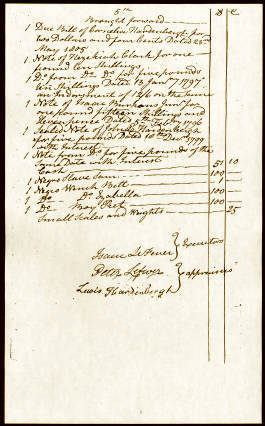 Following a person's death, inventories were often used in order to establish the exact contents of the estate, which would subsequently be sold off at public auction. The proceeds of these auctions would often be divided amongst the heirs or executors. Aside from descriptions of the items and the quantities of each, the inventory also provides the purported market values, or going rates' so-to-speak of each item. In this way, we can gain a more tangible perspective on the value of an African slave in relation to other material possessions, during the time period in which the inventories were compiled. Further, in conjunction with the use of other documents such as wills, vendues, and bills of sales, it can be possible to decipher the fate of individual slaves through the use of inventories. Such is the case in this inventory of Charles Hardenbergh's estate, in which a "Negro Wench," named Isabella, who would later be known as Sojourner Truth the renowned abolitionist and activist, is listed at an assessed value of one-hundred dollars. Born Isabella, the ninth child of slaves Betsy and James in Hurley, New York, Sojourner took on her new name at the age of 46. Born into subjugation, Sojourner Truth came from meager beginnings. After an abolishionist couple in Rifton, New York, the Van Wagener's, gave her freedom, she became one of the nation's most vocal anti-slavery lecturers and remains a symbol for equality and women's rights to this day.